This paper analyzes Syrinx for Solo Flute, a late piece of Debussy and attempts to investigate how new musical elements got merged into early 20th century music within the framework of tonal concept. The Syrinx for Solo Flute is a monodic piece and it proceeds with main motives of 3 and 4 note groups. The overall flow of the piece is developed by the intervallic relation which has free rhythmic pattern and it can be analyzed as a piece that ignores the tonal and solely consists of intervallic relation. Thus, this piece has been analyzed as proceeding with simple intervallic alignment by many analysts. However, this analysis exhibits that the distinct melodic line that is shown by the note group with a very regular rhythmic pattern proceeds within the framework of the traditional tonal concept. In this piece, Debussy exquisitely combines the pentatonic scale with the whole tone scale within the framework of the traditional B<sup>b</sup> and D<sup>b</sup> tonal, consequently achieving both conservative and progressive tendencies. The whole piece shows that on a large scale it contains the pentatonic scale having B<sup>b</sup> and the whole tone scale having D<sup>b</sup> as their tonal centers. Therefore, from the perspective of the tonal, Debussy exhibits the dual aspects of the attempt to destroy the traditional tonal by introducing a new scale and at the same time to blend the new musical element into the traditional tonal system. This way of analysis focusing on the tonal aspect thus can help us understand the various characteristics and tendencies of early 20th century's music. 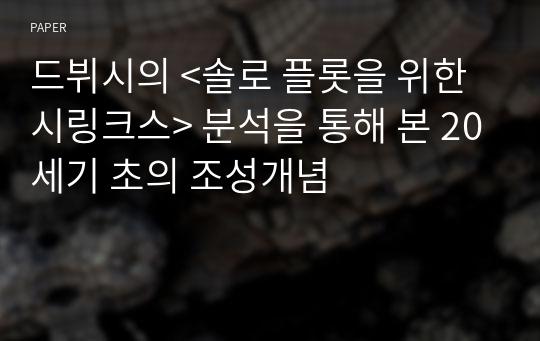