Chopin’s Etudes, op. 10 is one of the most representative collections in the age of Romantic music. This etude consists of twelve works that are independent with key and tone arrangements and music contents in terms of traditional tonal harmony. However, it is doubtful that the collection truly consists of twelve works because of the irregular arrangement of the works according to the year of creation and of key and tone arrangements consisting of mostly three note scales.Eventually it shows that there is a symmetry between horizontality and verticality through an analysis of Neo-Reiamannia theory and set-theory. This symmetry reveals that eleven of the works are all ternary forms and shows that those works are cohesive in three dimensional ways. Finally, Chopin’s Etudes, op. 10 is unity flows from a coherent tonal and formal organization.Chopin was a master of small forms. And his etudes have accomplished the unification between music form and tonal system in his works. 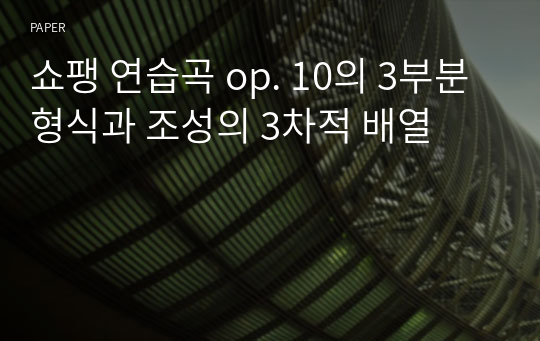