The "Capriccio", composed by Igor Stravinsky in 1931, is known for the work which shows the tendencies of neoclassicism well compared with his other piano concerto. The concrete studies in the thesis reveal how Stravinsky expressed the tendencies of neoclassicism since 1920s in his music.Stravinsky, at first, endeavored to evolve "Capriccio" with the fantasy based on free form and he showed splendid technics beyond percussion technique in its piano part. Those aspects reflect that his music is in harmony with romantic concerto. It is also proved by his autobiography on that he regarded the works of P. Tcahikovsky and C. M. von Weber as a model.The "Capriccio", with the harmony of timbre between piano and orchester, is evaluated to that Stravinsky drew a new model of instrumental concerto from this work. Stravinsky organized the instruments of "Capriccio" into two parts, Concertino and Ripieno. It means that he composed this concerto with the conscious of Baroque Concerto Grosso.The feature of these organization of the strings, however, has more inclined to Stravinsky’s intention of focusing on integral sound effects than the balance of the strings. The piano concerto "Capriccio" composed by Stravinsky, it is 20th’s work though, can be interpreted that it is a part of his multiple musical varieties, by founding the tendencies of Baroque, Classics and even Romanticism in his work.Stravinsky's achievements drawing traditional tendencies into 20th's new trends, possibly, are new models for confirming neoclassicism found in his early works. 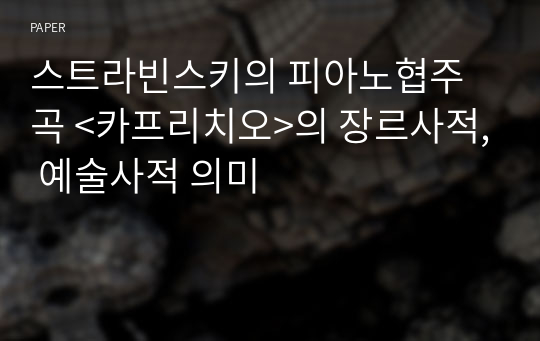