The purpose of this study is to analyze the style and technique in Hemingway’s major short stories, such as "The Killers," "A Clean Well-Lighted Place,” “The Undefeated," "The Snows of Kilimanjaro," and “Big Two-Hearted River.” The root of Hemingway’s style and technique is his unique Iceberg Theory, which is produced directly from Cezanne's modern space conception. This theory produces many forms of techniques and styles. I classified these styles and techniques into three sections, and analyzed the kept or unkept aspects of his Iceberg Theory techniques in the above short stories.The first section is composed of simplicity, omission, simple and rhythmic sequence, objective correlative, understatement, and symbolic image technique. These techniques are active in the five successful short stories. For example, in “The Killers,” in the expression of the theme of this work-the discovery of evil - Hemingway treated understatement, sequence of motion, and objective correlative such as the towel, Andreson’s wall, and Max or Al's symbolic action. Also, in "A Clean, Well-Lighted Place” the first section techniques are well balanced, and understatement is distinguished in expressing the older waiter’s inner state of mind toward the old man, and in expressing the character of old man.The second section, including picturesqe expression, expressionistic representation, and contrast, are active also. For instance, "Big Two-Hearted River" shows Cezanne's picturesque expression in delivering the landscape of Seney. And expressionistic representation and contrast are found in expressing the emotion of the characters, older waiter, younger waiter, and old man in "A Clean, Well-Lighted Place."The third section, involving rhythmic sentence and the proper mixture of forward and backward movement of narration, are likewise active. For example, in “The Undefeated” the rhythm of repetition, pronunciation, or meaning is notable. And "The Snows of Kilimanjaro” and “The Killers" show the balance of forward and backward movement of narration.In short, Hemingway's style and technique are well balanced in his major short stories. Accordingly, the best of Hemingway's works is in his major short stories, as well as in his successful novels and novella. 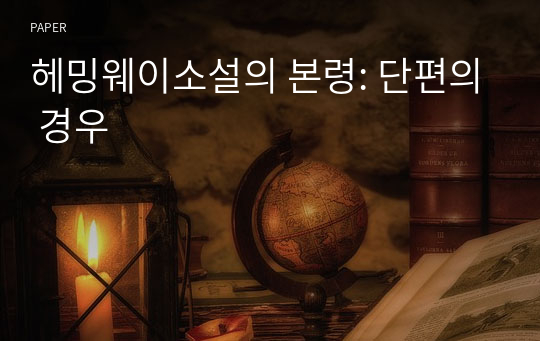