『The Vanished Man』 is Kim Jeong-haiVs “vanished” novel. Even its existence had been in a veil because the novel was omitted from 『Yosan Soseolmoknok (The List of Yosan’s Literary "Works)』written in his own handwriting. It was published in the No. 21 issue of 『Gyeongnam- gongnonjin July, 1954 and the No.2 issue of 『Gyeongnamyeongam (Gyeongnam Yearbook)』 fist mentioned the fact. 『The Vanished Man』set in Busan, a refuge place during the Korean War period, has the following distinctive features.For starters, 『The Vanished Man』 adopted double plot into narrative style to avoid monotonous narrative and to bring out diverse voices through a prism of a picture of a cow. The main plot logically chronicles how Jeong Dong-ho and his wife tried to get a large sum of bank loan, enhancing the readability. By the means of its character Jeong Dong-ho, the novel contextualizes materialism and a series of attempts to hit the jackpot at one try that were prevalent in Korean society during the Korean War period, to evoke the thematic and emotive effects of the story. In contrast, the sub plot of describing how Jeong Dong-ho and his wife are influenced by Park Deul’s picture of a cow is introduced when charactersf tensions begin to be eased in the main plot. The picture of a cow painted by Park Deul is depicted only in a symbolic way, undermining the thematic and emotive effects.Second, the novel adopts the omniscient point of view, but stays away from commentaries. Unlike other Yosan's novels, 『The Vanished Man』 does not adjust narrative flows and clearly expo.se the theme through commentaries, nor provide information on the topic in detail. Only a piece of the theme that the writer had in mind is revealed, so the theme does not seem to directly control the story.Lastly, the picture of a cow in the novel remains nothing but symbolic, so readers find it difficult to he immersed in the ‘story and they have to decode the meanings that the picture carries. First, the picture represents purity as opposed to Jeong Dong-ho’s snobbery. It serves as self-consciousness that splits his inner world. Second, the painting signifies Korean national identity and symbolically contextualizes the corrupt Korean society at the time of the Korean "War, Third, the picture of a cow implies sexual desire or fantasy. Even though it reveals a sense of crises between the couple in the narrow sense, it also imprints awe of life itself in the broader sense. Like this, the picture of a cow, confined to being just symbolic in the sub plot, can be diversely associated with the main plot.In conclusion, 『The Vanished Man』 is a novel in which Kim Jeong-han attempted to make a variety of changes to the conventional narrative style by structurizing double plot, refraining from making omniscient commentaries, and using symbols of a picture of a cow. Yet, Yosan seems to have not been quite satisfied with the result. So, it is not far-fetched to assume that Yosan classified his creative works in the 1950s including 『The Vanished Man』 as the products of the time when he stopped writing. In other words, it is a result of self-censorship that Yosan did not want to make public his unsatisfactory works, but remaining silent on the fact rather highlights the missing parts in the list of Kim Jeong-han’s novels. 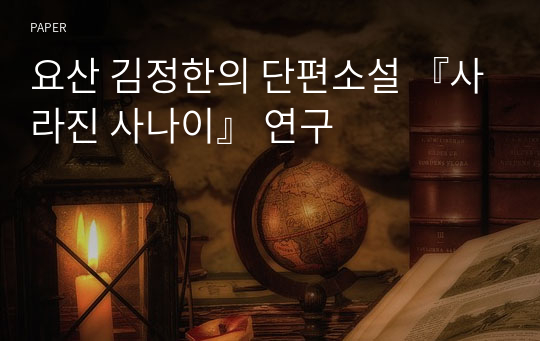