Background: Sphingomonas paucimobilisis an aerobic, nonspore-forming, nonfermentative gram-negative bacillus and was known as Pseudomonaspaucimobilis. It is distributed in the natural environment and forms biofilm in water systems in hospitals and devices like nebulizers and ventilators. It is not a major pathogen with a low virulence, but several cases of severe infection have been reported with the organism being obtained from blood, sputum, urine, peritoneal fluid, and catheters. Case Summary: We report a 73-year-old Filipino male, who presented with difficulty of breathing. He was hypertensive, diabetic, and had chronic kidney disease (CKD) undergoing regular hemodialysis. He received treatment for pulmonary tuberculosis and underwent repeated thoracentesis for recurrent pleural effusions secondary to CKD. He was intubated for persistent dyspnea and was admitted at the intensive care unit. He was managed as severe sepsis secondary to pneumonia and was started on Piperacillin + Tazobactam and Azithromycin. Blood culture was negative for any bacteria. Tracheal aspirate culture revealed Enterobacter cloacae, which was sensitive to Piperacillin + Tazobactam. On the 13thhospital day, he developed persistent hypotension and desaturation. Noradrenaline drip was started and he was managed as septic shock secondary to ventilator-associated pneumonia. Antibiotics were shifted to Meropenem. Blood culture was negative. Tracheal aspirate revealed Extended Spectrum Beta-Lactamase positive Sphingomonas paucimobilis that was resistant to Meropenem. Antibiotics were changed to Ciprofloxacin however, persistent hypotension and desaturation recurred and despite additional inotropes, patient expired. Conclusion: The existence of Sphingomonas paaucimobilisin the natural environment does not pose any threat although recent literature shows that it can cause severe infection and shock among immunocompromised and critically-ill patients. In the Philippines, no published report has been made on its incidence. With the increasing episodes of antibiotic resistance and incidence of previous non-pathologic bacteria now causing severe infection, it is important that this organism be carefully studied and documented. 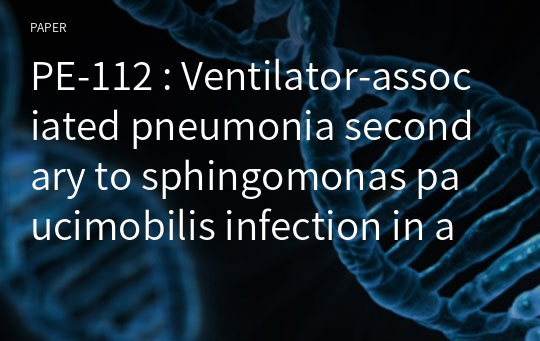