The Belt Road Initiatives, Identity Politics, and The Making of Southeast Asian Identity

The Chinese Belt Road initiatives in the Southeast Asian countries marked a new chapter in the development of China political influence on this region. This article looks at the initiative from the cultural dimension and aims to place its narrative as the entry point to understand the use of identity politics in Asian countries that target the Chinese diaspora. This topic relates to the primordial sentiments of Southeast Asian nations amid massive Chinese investment in the region. The issue of Chinese investments under the Belt Road Initiative corridor has a relationship with the formation of anti-Chinese discourse and anti-communist in some Southeast Asian countries. We took the cases of Indonesian and Malaysian elections to observe the use of identity politics and anti-Chinese political discourse in Southeast Asia. In both cases, a common issue emerged, that of the strengthening both Islamic and indigenous sensibilities. The establishment of ASEAN during the Cold War may be seen then as an anti-thesis to emerging Chinese power. However, anti-Chinese and anti-communism sentiments were not enough to unite the forces of the nations of Southeast Asia. We have concluded that brotherhood, mutual prosperity, and anti-neo-colonialism are yet to be fostered completely to make a distinct ASEAN identity. 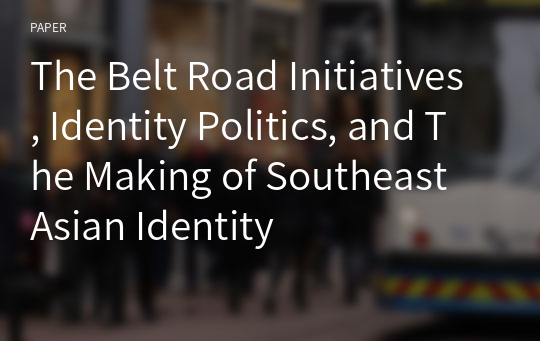