The question ‘YOUMEIYOU(有沒有)+VP?’ indicating ‘Perfect’ was mainly used in the Southern Chinese dialect, recently this question ‘YOUMEIYOU(有沒有)+VP?’ has also been widely used in Mandarin. In the academic world, it is reported that the appearance of ‘YOUMEIYOU(有沒有)+VP?’ was influenced by the Southern Chinese dialect. However, there are divergent opinions about the part of speech of ‘YOU (有)’, such as ‘auxiliary verb’ , ‘adverb’ , ‘verb’, and ‘particle’ etc,, and these are classifiable into two main theories-‘auxiliary verb’ theory and ‘adverb’ theory. In this paper, we considered the validity of these two theories in terms of syntactic, semantic, diachronous, and typological. The results are as follows.First, based on the prototype category theory, we reclassified typical syntactic and untypical syntactic features of ‘auxiliary verb’ and ‘adverb’. Through this, we considered the syntactic features of ‘YOU(有)’ are closer to the syntactic features of either of the two. As a result, It is reasonable to think that ‘有(YOU)’ is an ‘adverb’ that has untypical syntactic features (It is ‘adverb’, but can constitute a positive-negative question, such as ‘ZAIBUZAI(再不再)’, ‘CHANGBUCHANG(常不常)’, ‘CENGBUCENG(曾不曾)’ and so on.).Second, the semantic features of ‘YOU(有)’ in the question ‘YOUMEIYOU(有沒 有)+VP?’ indicates ‘Aspect’ meaning (‘Perfect’), does not indicate the ‘Modality’ meaning represented by the general ‘auxiliary verb’(ability, will, deontic, epistemic etc.). Unlike English, contemporary Mandarin does not have a separate form of ‘auxiliary verb’(have, be) that represents ‘Modality’ and ‘Aspect’. On the other hand, it is reasonable to consider ‘You(有)’ as an ‘adverb’, because ‘adverb’ has played a role of ‘Aspect’ meaning(Ceng(曾), Yi(已), Zai(在), Yao(要) etc.) from the pre-QIN(先 秦) dynasty before the appearance of ‘Perfect particle’ ‘了’.Third, in the Chinese history and grammar academic world，the prevailing view is that ‘MEIYOU(沒有)’ which began to appear in front of VP in Ming(明) dynasty is regarded as a ‘negative adverb’. Therefore, if ‘MEIYOU(沒有)’ in the question ‘YOUMEIYOU(有沒有)+VP?’ is regarded as a ‘negative adverb’, it is not reasonable to regard the remaining ‘有(YOU)’ as an auxiliary verb. Also, there are some examples of 'You(有)' written as an ‘adverb’ in the pre-QIN(先秦) dynasty, so it is reasonable to regard ‘有(YOU)’ as an ‘adverb’.Fourth, according to the study of the linguistic typological theory, the ‘H-POSSESSIVE’ verb was grammaticalized toward ‘Perfect’ marker in many languages around the world. However, after this grammaticalization the part of speech is not all ‘auxiliary verb’. In some languages, they can be grammaticalized toward ‘adverb’. Therefore, it is reasonable to regard ‘有(YOU)’ as an ‘adverb’. 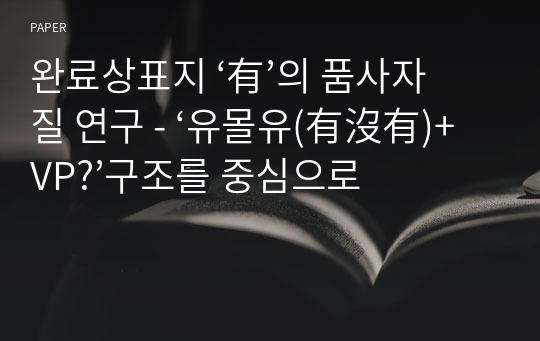