This essay briefly compares James Joyce’s and Mo Yan’s epic novels, particularly Ulysses and Life and Death Are Wearing Me Out, and examines the way the Chinese writer’s works evoke the Irish author’s in writing style and theme. Despite the apparent distance in time and place between them, the two authors share the experience of living under social and political repression. Joyce’s Ireland, as a British colony, was stricken with ideological conflicts between colonialism, nationalism, and Catholicism, which were exacerbated by tragedies such as the Great Famine of the 1840s. Similarly, Mo Yan’s China has suffered revolutionary projects imposed by the Communist Party, leading to violent histories such as the Great Famine of the 1960s and the one-child policy. As writers of oppressed nations, Joyce and Mo Yan both address the subject of reincarnation in their epics written in the style of a cyclic narrative, employing magical realism to help the narrative delve deeper into reality. Such writing style, along with an evasive tone of the narrative, suggests the authors’ uncertain, ambivalent attitude toward their oppressive reality. As represented by their protagonists in conflict between individual and national rights and freedoms, Joyce and Mo Yan can be said to embrace the complex reality of colonial Ireland and socialist China, respectively. Resisting and simultaneously acknowledging the responsibility to their own nations suffering tragic histories, the Irish and the Chinese authors may well be recognized as postcolonial and postsocialist writers, respectively. 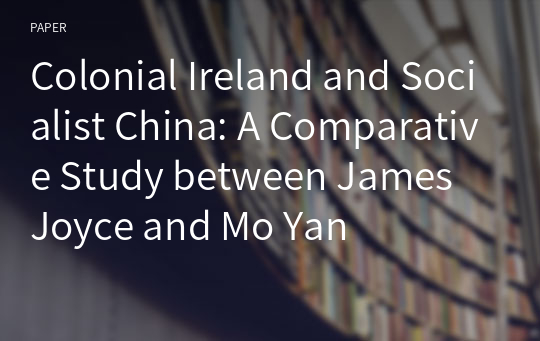