This study explores how James Joyce portrays death and the Irish Catholic funeral rituals. Joyce depicts the funeral of Paddy Dignam, an ordinary Dubliner, through the Jewish protagonist Leopold Bloom’s eyes in the “Hades” episode of Ulysses. Although Bloom is not accepted by the Irish community due to his Jewish lineage, he partakes in Dignam’s funeral with several Irish mourners. We experience scenes of the streets and the conversation within the carriage filtered through Bloom’s consciousness. He observes the funeral procession in terms of economy and is skeptical about the Catholic liturgy. His thoughts about death are contrasted with those of the Irish’s. Whereas Bloom obtains vital energy from death and even regards the corpse as a fertilizer to produce new life, for the Irish, death is a traumatic event and an irrevocable loss. Most of the Irish idealize death and readily fall into sentimentalism.Death as described in “Hades” is inextricably linked with Irish history. Joyce suggests historical events, such as the Great Famine and nationalist movements, in his portrayal of death. He implies the close relationship between Irish nationalism and Catholicism in relation to death. Therefore, death and the dead constantly control the living, although indirectly. In sum, Joyce criticizes this funeral culture and presents a vision of life through Bloom. 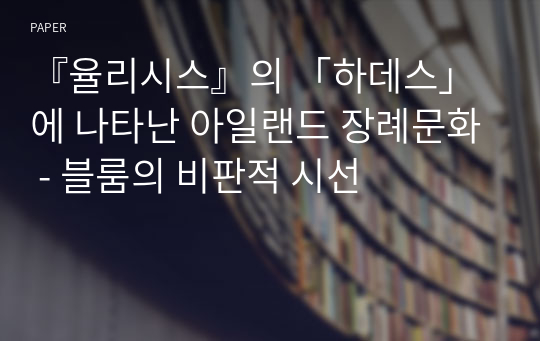