There is a rising interest of depletion of deposited fossil fuel and environmental pollution, inducing extensive studies to find new alternative sustainable energy sources to replace current petroleum based energy usage. As one of solutions, anaerobic digestion (AD) treating organic wastes has been considered one of the most promising processes owing to its sustainability, low production of sludge, unnecessariness of aeration, and biogas generation. Swine wastewater is characterized by high strength of organic matter contents, so it is regarded as a potential feedstock to produce methane through AD process. To investigate the functional relationship between the microbial communities and anaerobic process performance, regular seasonal sampling was done at four full scale anaerobic digesters treating swine wastewater in South Korea for two years. As results of process and microbial community analyses, chemical oxygen demand (COD) removal efficiency was monitored to proportional to those of carbohydrates, proteins and lipids. Methanogenic and bacterial populations were also positively related to the removal efficiencies of carbohydrates and lipids. However, proteins removal efficiency was independent of microbial population. It means that microbial communities in full scale anaerobic digesters are most likely to be mainly associated with carbohydrates and/or lipids metabolisms, indicating that proteins may be putative recalcitrant contents in wastewater. The microbial population tends to be more affected by places rather than seasons; however, with respect to seasons, the highest species abundances were observed mainly at winter. This implied that rising temperature in the anaerobic digesters in summer would be not suitable for the growth of mesophilic microorganisms, known to be predominant in anaerobic process. Actually, this speculation is supported by the fact that the highest removal efficiency of COD was measured at winter samples. The marked information in this study must provide a real insight into the effective field operation of anaerobic digestion. 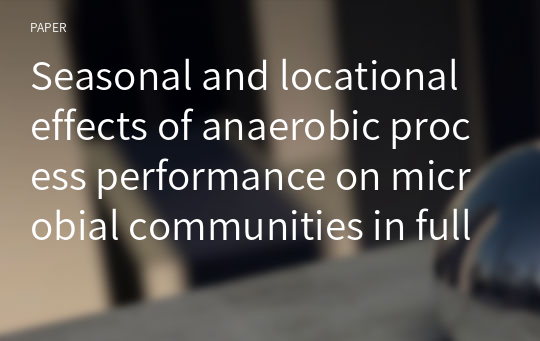