A new method for liquid chromatography with post column reaction is suggested for the separation and quantification of tertiary amines. A mixture of triethanolamine and N-ethyl diethanolamine was separated by a strong cation exchange column, followed by spectrophtometric detection of the blue colors generated from the reaction of each amine with the Folin-Ciocalteau reagent.The tertiary amines were properly separated when an eluent of pH 9.5 containing 0.5M sodium nitrate was used. Under this condition, calibration curve of triethanolamine in 2-10mg/ 100ml concentration range was attained. Good results were obtained when cream and shampoo preparations containing known amount of triethanolamine were analysed accoring to this method.In case the samples did not contain any other interfering reducing substances, the amine was quantitatively determined by the simple reaction of the samples with Folin-Ciocalteau reagent, and the subsequent spectrophotometric measurement. 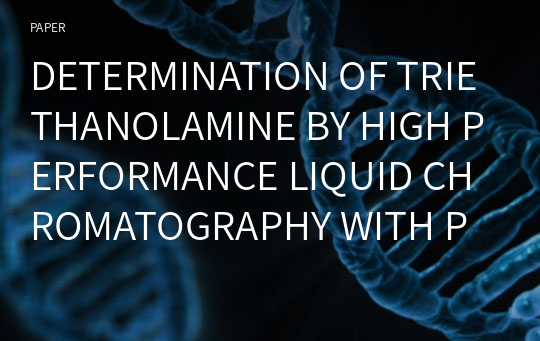