The Interactive Reader, or: The Writeable in Narrative Texts

The article explores the means that activate the reader and encourage him/her to become a co-author of the fictional narrative. Starting from the premise that from the 19th to the early 21st century different strategies engage the figural reader―created as a character in the novel―or the implied reader―inscribed into it―to creatively respond to the narrative’s representations the focus is on the addressivity of a text. Especially where the narrator or writer figure creates a dialogic situation with the reader or a narratee, reader stimulation becomes crucial. The article re-considers theoretical approaches of reader orientation and reader-response criticism.For epistolary novels of the 18th century perspectivisation has been defined as an effective instrument of reader mobilisation, and the gaps in narrative representations were generally found to be the most usual device. Other means to inspire interaction, however, are asking for investigation. The major examples chosen for this exploration are therefore works in which the role of the reader is very carefully and clearly designed: Jane Austen’s Northanger Abbey with its discussion of the anti-novel discourse of the late 18<sup>th</sup> century, William Thackeray’s Vanity Fair as a realistic novel, where the narrator’s playful interaction with the reader repeatedly emerges, E. M. Forster’s The Longest Journey as an Edwardian text in which socio-political and sociocultural issues, often satirically presented by an impersonal narrator, are able to excite the contemporaries. The recent novel by Irish writer John Banville, The Blue Guitar, exposes the significance of the metanarrative for postmodernist fictions. 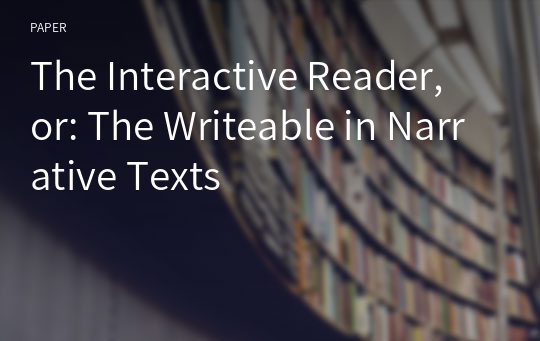