This monograph is about lyricism of 「Qiushengfu」,which is wrote in 1941 during the Sino-Japanese War. The Sino-Japanese war influenced the Chinse people both historically and in literature. Especially, fighting back to Japan was important point to Tianhan, who changed his own ideology in 1930, in order to write anti-Japan theme reflecting the realities of realism. 「Qiushengfu」is the most representative work in this period.This monograph describes a historical case that when Tianhan writing 「Qiushengfu」was during the Sino-Japanese war and describes the hwa-geuk-centered literary background for the rise of the Chinese public's anti-Japanese sentiment. Also it describes the anti-Japanese patriot which Tianhan persued through the whole story. Tianhan talks about the hope that family will come before family and Chinese people and that people will unite and pursue a new world. Therefore, He inserted 6 poems into his work 「Qiushengfu」to reveal lyricism. So this monograph is also about those 6 poems make 「Qiushengfu」lyrical.In the historic vortex of anti-war, Tianhan steadily created a flower drama that led to the promotion of anti-Japanese sentiment for the Chinese public, but did not overlook the excellence of traditional Chinese dramas, but melted them in his works and「Qiushengfu」is a drama work that represents Tianhan's this ability, 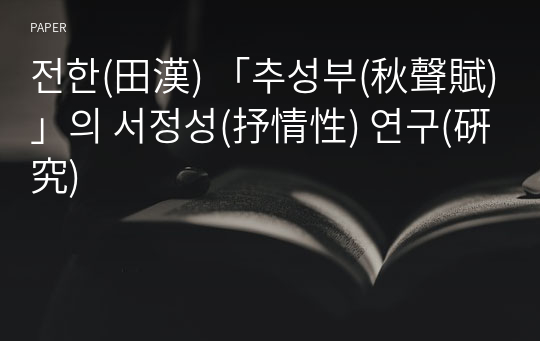