This current research describes time-resolved interaction of shear layers in triple swirler configuration with the aid of LES simulation. In order to reduce the number of grid points and the consequent simulation time, the LES simulation is performed on region from the exit of the swirler to outlet. To ensure that such approach is valid, three preliminary RANS simulations were performed and compared with the LES results as is detailed below. For the RANS simulations, the Realizable k-ε model was used to close the Navier-Stokes equation and all the simulations are performed in nonreacting condition with air as working fluid and no-slip wall boundary condition. Polyhedral grids were used where for the first simulations a basic refinement was done at the swirler and its exit. The grids are refined via a field function, with respect to the Taylor micro-scale to resolve the small scale structures within the flow field. With such approach the total cell count was decreased from 3,009,987 to 1,815,316 cells. Comparison with the averaged experimental results indicated that implementation of such method is valid. It was found that the tangential velocity component clearly separates the counter-rotating shear layer formed from the axial and radial swirlers with two emerging flows and negative sign. The turbulence activity due to tangential velocity is higher than the other two and in addition to the interaction point of the shear layers, depicts a relatively high region of turbulence activity immediately after the swirler at the outer edge of the outer shear layer. This region contains small axial velocity component and shows a weak recirculation zone due to the high velocity gradient. The instantaneous flow field showed that vortexes are initiated at the edges of the shear layer for both the central axial swirlers and outer radial one due to the development of Kelvin- Helmholtz instabilities. These instabilities appear due to the shear generated between two adjacent high and low velocity flow. From the vorticity contours downstream, two type of vortex can be found. One is the consequence of the outer shear layer instabilities dealing with the ambient flow or Kelvin-Helmholtz instabilities and then the vortices generated due to mixing of the shear layers. Type 1 vortex leads to a local recirculation zone while the second type is characterized by high vorticity gradient due to the local zero velocity region. Due to the local zero velocity region resultant from two opposing shear layers, the flow travels around the zero velocity region and results in a much lower vorticity and strong local flow acceleration. 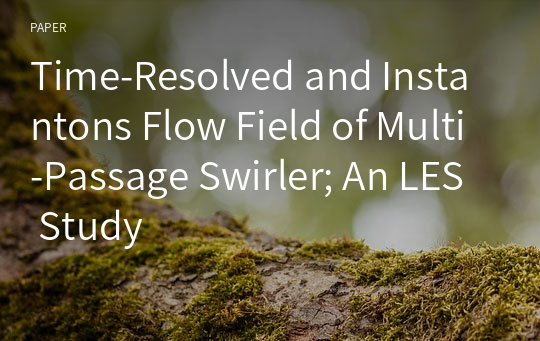