The c-Met protein is a receptor tyrosine kinase involved in cell growth, proliferation, survival, and angiogenesis of several human tumors. Overexpression of c-Met has been found in gastric cancers and correlated with a poor prognosis. Indirubin is the active component of Danggui Longhui Wan, which is a traditional Chinese antileukemic recipe. In the present study, we tested the anti-cancer effects of an indirubin derivative, LDD-1937, on human gastric cancer cells SNU-638. When we performed the in vitro kinase assay against the c-Met activity, LDD-1937 inhibited the activity of c-Met. This result was confirmed by immunoblot and immunofluorescence of phosphorylated c-Met. Immunoblot analysis showed that LDD-1937 decreased the expression of the Erk1/2, STAT3, STAT5, and Akt, downstream proteins of c-Met. In addition, LDD-1937 reduced the cell viability and suppressed colony formation and migration of SNU-638 cells. Furthermore, LDD-1937 induced G2/M phase arrest in the SNU-638 cells by decreasing the expression levels of cyclin B1 and CDC2. Cleaved-PARP, an apoptosis-related protein, was up-regulated in cells treated with LDD-1937. Overall, this study suggests that LDD-1937 may be a novel small-molecule with therapeutic potential for selectively inhibiting c-Met and c-Met downstream pathways in human gastric cancers overexpressing c-Met. 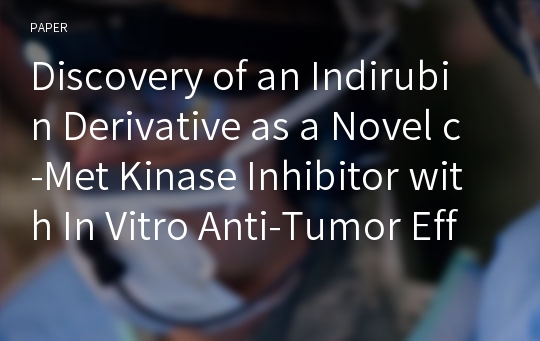