‘Real’ and ‘fake’ in filmic representation is a long-standing dilemma. Reality is an age-old anthropological and philosophical debate characterized by the dialectical tension within things as they appear through our representation and what they ‘really’ are. Film as an audiovisual representation of the world is a textual “construct” in the same way as the written text; writing on musical cultures as well as filming musical cultures are both unavoidably form of “creative” treatment of a (musical) reality. The ‘crisis of representation’ of the 1970s in visual anthropology studies brought inevitably to redefine the boundaries between fictional and documentary film, encouraging new audiovisual languages, such as the docu-fiction or "ethno-fiction", as result of the hybridization of the documentary-style languages and the narrative conventions of fictional-theatrical film. This article offers an overview of different ways of representing traditional music -with a particular enphasis on documentary, fictional and docu-fiction films dealing with traditional music in China - through the use of a variety of cinematic languages, interweaving brief historical notes of the development of early Chinese cinema with different theoretical approaches expressed in visual anthropology and ethnomusicology. 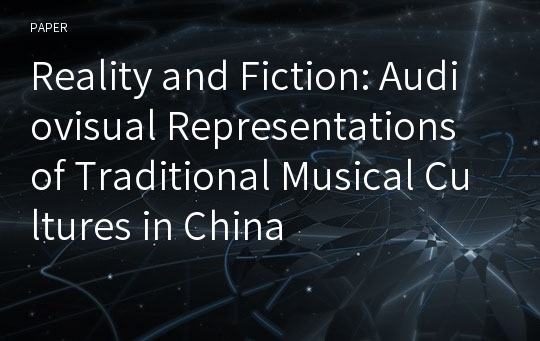