This study analyzed the composition and contents of a portion of hot water and methanol extract created from Artemisia princeps var. orientalis leaves, stems, and roots. The results were as follows. The composition and content of free amino acids in the water extract were found to be 16 species of leaves and stems, respectively, and 11 species of roots. The methanol extract was confirmed to contain 13 leaves, 11 stems, and two roots. In the water extract, the non-constituent free amino acid compounds of the protein were confirmed as the leaves of seven species, six stems, and two roots. Methanol extracts were confirmed to contain two leaves and stems, and one root. In addition, composition and contents of free sugar were confirmed to be two species of leaves and roots, and three species of stems. In the analysis of phenolic acid and flavonoids, phenolic acid was found to be contained in seven species of leaves, six species of stems, and seven species of roots in the hot water extract. As a result, it was found that the content of free amino acids, free sugar, total polyphenol, and total flavonoid compounds were high in the A. princeps var. orientalis extracts, and that there were several types of phenolic acid and flavonoids. It has been confirmed that there is a high possibility for utilization as a natural antiseptic or cell growth activating factor as well as a natural antioxidant agent in the production of functional cosmetics. 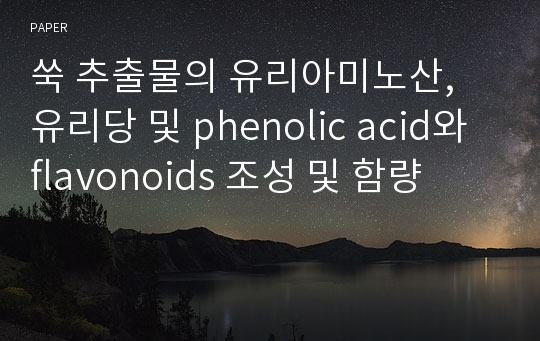