This essay is to inquire out Shakespeare’s opinions on the race-prejudice of his time. It is difficult, however, to interpret his definite opinions and a definite point of view. In the Introduction to The Stranger in Shakespeare, Leslie A. Fiedler said that at the heart of any work “there is always present a set of assumptions about the nature of man and, more particularly, about the limits of the human.’’ He deals with the stranger in Shakespeare, concerned with the Jew, the black, the “savage man” and, most especially, the witch as they appear in the complex web of the whole Shakespearean corpus. His book was full of suggestions to my study of Shakespeare’s race-prejudice.Othello is one of the most difficult to interpret, not only because of its equivocal tone but also because of anomalous structure, which, in fact, determines and explains that tone. I ago and other Othello’s enemies describe Othello as a “black ram”, a “Barbary horse”, “thick-lipped”, etc. As Fiedler analyzes Shakespeare’s vocabularly and the assumptions which underlie it, for Shakespeare “black” does not primarily describe an ethnic distinction, but a difference in hue ancl temperament, distinguishing from each other what he would be. In this context, “fair” has primarily a moral significance as the opposite not of “black”, but of ccfoul’’, which means both ‘‘ugly’’ and ‘‘vile’’. Shakespeare does not here use that ethnic label “black” pejoratively. He dreams through Desdemona a symbolic marriage of all that Europe and Affrica, civilization and barbarism, and courtesy and strength. Whether Othello’s color is black or brown, Shakespeare does not tell us about the racial prejudice, but about the human frailty such as jealousy.The Merchant of Venice is a play about a Jew. The opening scene, dominated by the grave figure of Antonio, might easily be the first scene of a tragedy. It makes it certain that Shylock is at least as seriously conceived as Antonio. If Shylock, as Antonio and his friends cursed him, is a villain, an awful and appalling human being, who made him such? Shakespeare, who shared the prejudice of his age against Jews, would himself have applauded Antonio’s action and might have even imitated it. But he never takes sides. Even though Shakespeare’s reaction to Shylock as a Jew is likely to have been that of his time, he allows Shylock a sympathetic apology for himself: “Hath not a Jew eyes? Hath not a Jew hands, organs, dimensions, senses, affections, passions? . . . Shakespeare’s intention is to prove that Jews and Christians are both human beings. Today he would see in mercy, which embraces understanding and forgiveness, the only possible solution of our racial hatreds and enmities. 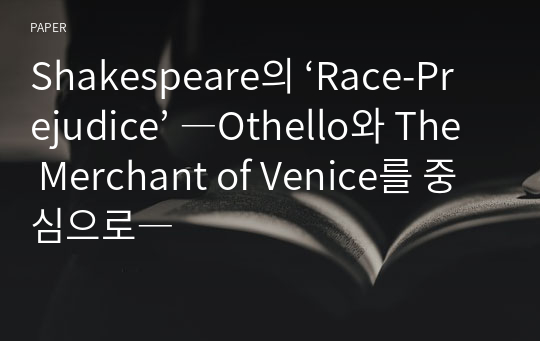