In this article I will investigate and research Hemingway’s craftsmanship by finding out various evidences of contrast in the structural patterns of A Farewell to Arms. Hemingway has been regarded as the pioneer in a new type of literature and the founder of the most widely imitated prose. This may be inferred by his surprisingly effective structure through understatement, skilful arrangement in the structure of the novel, ideal style and shrewd omissive method etc. But we should pay more attention to Hemingway’s symbolic juxtaposition or contrast to evaluate his true technique.A Farewell to Arms is divided into five Books just like a dramatic tragedy. The relationships among the books establish contrast between love and war. Furthermore the atmosphere of each book is changed from hope to despair according to the change of season and weather. With such a wonderful contrast Hemingway reinforced the theme of the novel and achieved his own territory in American literature.Book I introduces these two themes- love and war and the major events took place at the proper time which Hemingway set. The sense of doom, disaster and death in this novel are revived in the readers’ mind by the in방licit connotations of symbolic contrast with the seasonal change. That means that events are closely interwoven with the change of season. So with the seasonal change and contrast we can grasp what Hemingway wanted to convey indirectly.We can also find out that contrast technique is found in characters and symbol. The most important constrast is developed between Rinaldi and priest, and other minor characters are set in patterns of contrast. First of all Rinaldi and the priest are the pivotal role of the symbolic juxtaposition in characterization. The former relies heavily on the flesh (cafe and whorehouse) and the latter, on God’s love (Aburnzzi). So these two parallels offer that the one is the man without God, the other, the man with God The nurse act either as helpers to the relationship of the lovers or overt enemies. Valentini the competent drinking surgeon is contrasted with the incompetent doctors when Frederic was taken to hospital. The girls from the brothel is contrasted with the sacred virgins who join the men during the retreat.With all these mixture of contrast Hemingway presents a continual tension between an ideal and the reality and suggest the dominating theme. His descriptive method does not lie in the direct one but in the indirect one including these subtle hints of contrast. So the total structure of the novel is developed around the views of contrasting situations and symbols. With these contrasts Hemingway achieves his own ironical and ambiguous expression in his novel. 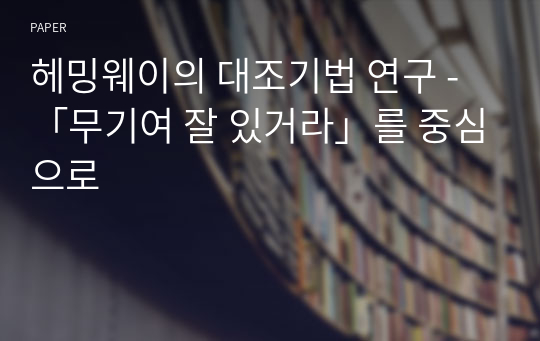