The turning point of Henry Vaughan’s poetry occurs in the world of Silex Scintillans. The achievement of Silex Scintillans’ is quite enough to secure his place as poet among the most original and attractive of English Poetry. This brief theses is to explore and to illumine the true nature of his Silex Scintillans.What is the most important is that the nature of Vaughan’s obligation to George Herbert was so great. It has also became the subject of much controversy. But anyhow, it is credit enough to the father of his poetry to have given his disciple spiritual quickening and the gift of devotional mind. And the Infuence of Herbert is literary as well as spiritual. So we call Henry Vaughan mystic, and devotional poet.At first, Henry Vaughan added the distinctive touch of his own highly Individual sensitiveness and imagination to the traditional Christian idea and the Hermatic-Christian idea, with the resulting correspondence and sympathies. Particulary these characteristics are apparent in his extraordinary sense of the presence of the Divine in nature, and in his perception of the relations between life and death, and in his recollections of childhood. He was especially interested in the ending of night and the breaking of dawn. Vaughan unquestionably had the Mystic’s yearning for God, but it was not the contemolations of God but the light and the quickening of the presence of God. God was distantly represented by the universal images through ‘Silex Scintillans.’ The Metaphysical love of surprising revealing contrast in his poetry serves well vaughan’s delight in the flash of the light of the other world on the darkness of this world, and of the finding of God in the little things of the Creation.Conclusively, Henry Vaughan was achristian humanist. And so, the writer thinks that Christian Humanism lies not in the negation of human nature but lies in the foundation of spiritual base of human nature, in which we can see the human nature lives free, moves free, and exists free. 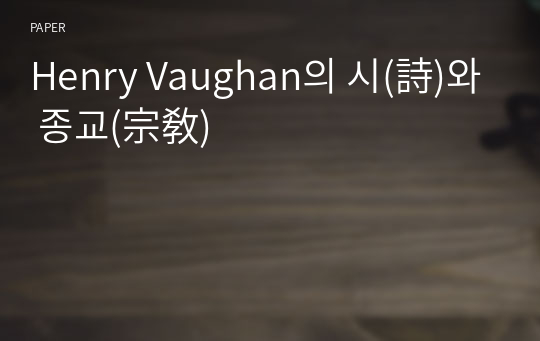