1. CONTENTS(1) RESEARCH OBJECTIVESThrough the case study of PFI method for the construction of silver house in Japan, to provide the possibility of opening new horizon in the elderly housing market, such as establishing new political measure for residing stability of elderly in Korea.(2) RESEARCH METHODThe basic concept for elderly housing in Japan, referred to the record of government report, academic thesis, journal, web site etc. For case study of subject, visit examination was arranged at Suginami ward office in Tokyo being the main body of public subscription. Benese Style Care Head office being the main body of business operation, and business site. Interviewed and obtained information for the outline of the project, characteristic of the business, difference with the traditional type, current operational status of the business, resident^ expense burden and so on. For further study, obtained background information and concurrently referred to the related record as to the details which was not derived from the interview.(3) RESEARCH RESULTSThe PFI care house of Japan is the new type of housing for elderly that has recently introduced after implementation of care insurance and gained good responses from the citizens. As it is grafted PFI system on the care house run by the private businessman at the paid cost. It has characteristics of welfare facilities and advantages of paid elder home together. For this business, local government provide idle land without financial investment. The private businessman builds the facility on the land provided and sell back their ownership to local government upon completion. At that time, national government pays 3/4 of the selling amount of the facility to the private businessman and local government pays 1/4 of the same. This portion borne by local government(1/4) shall be covered by the rent to be paid by the user during whole period of the business. Therefore Local government achieves their objective of policy without financial burden. It reduces the private operator’s financial burden by making practical use of the idle land and also reduces the user’s financial burden. Also the user is given quality service at the lower cost. Ultimately they reduces public cost and enhances the level of service.2. RESULTSAs such, PFI care house reduces the public cost and make qualitative improvement of paid elderly house through suitable share of role between the party of government and private businessman with practical use of idle land of government.Although PFI method applying BTO system is viewed necessary to develope diversified business methods, case study of Japanese PFI care house shows us the possibility of opening another new horizon, such as inducement of new policy with practical use of idle land of government party for residing stability of elderly in our elderly housing market, in which high demand of housing for the most aged is anticipated since the implementation of the nursing insurance in 2008, and also positive development of elderly housing is expected starting from time over 9% of aged population in 2005, in view of making business environment by government for private businessman with new method of raising business resources by way of practical use of idle land. 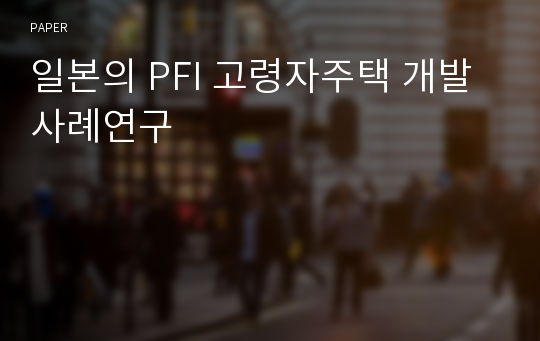