Audiovisual Expression of Biometric Data Based on the Polysomnography Test

The goal of this study is to provide a new type of audio-visualization method through a case analysis and work production based on Polysomnography (PSG) data, which is difficult to interpret or not familiar to the general public. The study method considers the definition of sleep and sleep data. The sleep data were classified into a normal group, a Narcolepsy group, an Insomnia group, and a sleep apnea group by focusing on sleep disorder graphs that were measured by the sleep polygraph. After that, the acquired biometric data were refined and converted into a text-based script. The degree of sleep in the text form of the script was rendered as a 3D animated image using Maya. In addition, the heart rate data script was transformed into a midi format, and sound was produced using GarageBand. After Effects was used to combine the image and sound to create four single channel images. As a result of the research, sleep data results could be easily understood by the general public through art instead of using difficult medical terminology. It also showed the possibility of artistic expression even in the absence of conscious actions. Through the results of this research, expansion and diversity of artistic audiovisual expression from biometric data is expected. 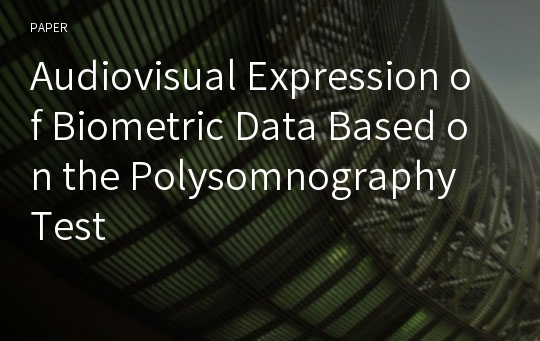