Should ESL Teachers Transform Their Classrooms into 'Sites of Struggle' for Radical Egalitarianism?

The purpose of this paper is to summarize, discuss, and critique some of the observations and interpretations made by Ryuko Kubota in her TESOL Quarterly (1999) article: "Japanese Culture Constructed by Discourses: Implications for Applied Linguistics Research and ELT.” Kubota argues that recent applied linguistics literature tends to construct an artificial cultural dichotomy between the East (the Other, especially the Japanese) and the West (especially Euro-Americans), the former being characterized by collectivism (which is negative in connotation), the latter by individualism (which is positive in connotation). She criticizes these taken-for-granted cultural labels, and attempts to demonstrate that recent empirical research challenges the veracity of these unjust essentializations of the Other. She then offers another way to accommodate cultural differences by adopting a critical multiculturalist perspective, the goal of which is radical egalitarianism between individuals and cultures. After a lengthy review of Kubota's observations and interpretations, I critique several points she made in her article, in particular her admission of a lack of interest in the truth or falsehood of certain historical events, and her advocacy of ESL teachers transforming their classrooms into “sites of struggle” for the purpose of pursuing “equality, morality, and justice.” 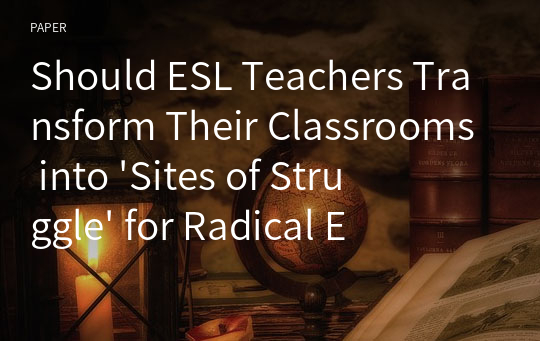