A marine ulvalean species (Chlorophyta) was collected from Imgok, which is located on the eastern coast of Korea. This species is morphologically characterized by distromatic, filiform to strap compressed or tubular thallus. Many branches were found near the base, but lacked proliferations. Cells were longitudinally aligned in the younger part of the branch and were disordered in the older part of the branch. A cap-like parietal chloroplast with one or two pyrenoids was contained in each cell. In a phylogenetic tree based on ITS and rbcL sequences, this species was nested in the same clade as Ulva torta and U. clathratioides from Australia, but formed a sister clade to U. torta from Japan. However, the genetic divergence between them was included in an intraspecific variation range within Ulva. This finding suggests that U. clathratioides should be reduced to a synonym of U. torta. Accordingly, the Korean alga was identified as U. torta based on the morphological and molecular data. This investigation is the first record of U. torta in the Korean marine algal flora. 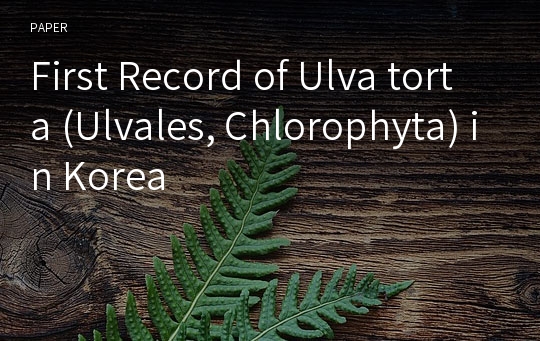