The long-tailed goral (Naemorhedus caudatus) has slowly recolonized habitats in South Korea. Because it is necessary to know the status of groups in recolonized areas, we determined detection frequencies and group sizes using camera trapping, a non-invasive monitoring method. In Uljin, a far southern goral habitat in South Korea, we used a Moultrie 5.0 camera and mineral block as bait during the breeding season in BaekAm Mountain (148 days, 18 May to 11 October) and Geumjong Mountain (63 days, 18 May to 18 July) in 2010. Totally, 155 images were captured in BaekAm Mountain, whereas four images were captured in Geumjong Mountain. The species was most frequently detected at sunrise (05:00-08:00) and sunset (18:00-20:00). Through population structure evaluation, we identified at least 11 individuals, including one solitary mature male, four females, four kids, and two solitary subadults in BaekAm Mountain. However, in Geumjong Mountain, we identified only two individuals (female with kid). Monitoring efficiency in the recolonized area differed depending on population density and habitat conditions. Because we could evaluate the population structure, and behavioral patterns in the study sites, monitoring using camera traps could be applied for the recolonized habitats in South Korea. 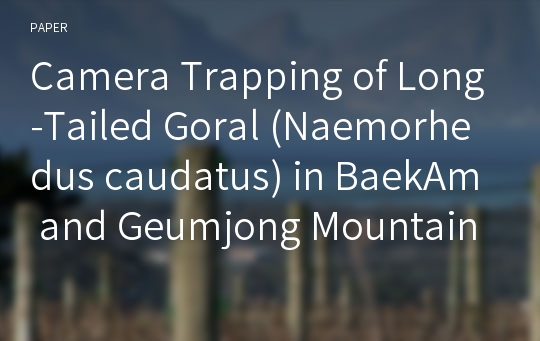