This paper is devoted to study N. Dyakovs’s play 『Wedding with a Dowry』; the comedy is analyzed in terms of conflict and competition, satire and criticism, entertainment and education, what should explain compromise and tension between the contemporary theater policy and the Soviet comedy. In the 『Wedding with a Dowry』, Olga and Maxim's strife is different from the traditional conflict of the drama; while they have a common goal of improving agricultural productivity and achieving production goals, the enthusiastic heros of comedy, who have strong competition spirit, own different views on how to achieve the goal: The conflict of comedy is replaced by socialist competition between two young activist leaders of collective farms. As a result, 『Wedding with a Dowry』 became a comedy of conflict-free. Since 1945, satire has become virtually impossible in Soviet theater, and the criticism overwhelms satire instead. Criticism and self-criticism were the means for evaluating social practice and overcoming individual errors and deficiencies. In the ‘Zdanovshchina’s period of Soviet literature, criticism and self-criticism had to become the principle of dramaturgy, what resulted in anomalous changes and modifications not only in the content of the Soviet comedy but also in the form: The process of < error-criticism-self criticism-rebirth > became a structural feature of the comedy plot and the laughter of comedy has weakened. When Diyakonov was writing the comedy 『Wedding with a Dowry』, he should consider the drama policy demands to deal with the modern themes of the Soviet Union and the characteristics of the comedy genre, which should provide laughter and entertainment. In his comedy, education is centered around the modern theme of agriculture; on the other hand, the comic situation is minimized. Kurotskin, who plays a central role in singing, dancing, and music, is also the object of character comic of the comedy; the proposal scene for Maksim produces the comic effect. Education and entertainment, which are integrated in the ending wedding scenes, should create the effect of emotion among the audience. But the truth of the impression of the ending is doubtful. Because emotion contributes to beautifying and varnishing of reality of the Soviet Union. 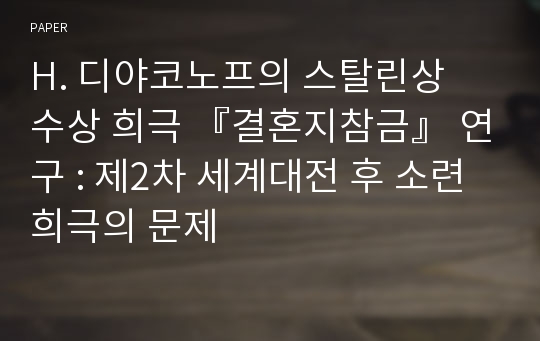