Jongmyojeryeak, the No. 1 of intangible cultural asset of Korea has all the 500-year history of Chosun Dynasty contained in it and is the cultural heritage of the highest value and cultural importance. The UNESCO conference held in Paris, France this year declared it as 'the masterpiece of human words-of-mouth and intangible heritage,' placing it to the level of the world's admiration. This study intended to reconsider and illuminate Jongmyoilmoo of Jongmyojeryeak, the No. 1 of intangible cultural asset of Korea, assuming this kind of work would shed another new and fresh interpretation of traditional culture, Unlike other Korean traditional dances, Jongmyoilmoo has its details recorded in 『Siyongmoobo』which is one of the most valuable historic documents concerning Korean traditional dances, thus enabling itself to be preserved and inherited correctly. It surely falls under the category of Korea's cultural assets of a great historic and artistic value. An analysis was made on the composition systems of technical term and its arrangement found in 「Botaepyunggimoo」 in 『Siyongmoobo』which consists of today's irregular and regular long and short rhythms, in order to search for the ways to harmonize each performance of Jongmyojeryeak and Jongmyoilmoo, that is, to match the theories and the practices. The results of the study are as follows : 1. There should be 'Haphyung(centering upon chest)' at Gochooksamsung following the first beat of beginning music. And 'Hasu(let down)' with the right hand should be made in one note or two notes at the first dancing passage of the second beat. 2. 'Jeomyoo' and 'Hasu' with the left hand should both be made in two notes at the first dancing passage of development step. 3. 'Yangsugeogyon(put both hands on shoulder)' must be made in four or three notes from the left side with both hands at the first dancing passage of conversion step. 4. 'Bokpa(grasp belly)' to the front side with both hands should be made in two notes at the first dancing passage of conclusion step. 5. Every last technical term of each passage including 'Hasu' of introduction step, 'Hasu' of development step, 'Yangsuhasu(let both hands down)' of conversion step, and 'Haphyung' of conclusion step should be made in one note or two notes whether it's an independent dancing passage or complex one. 6. Every technical term at the other middle dancing passage should have two core notes from which one + or - note will be made. 7. The most important and last step to harmonize dance and music as one is to decide the bar of three notes among the bars of three or four notes which can be an independent or a complex dancing passage in any piece. 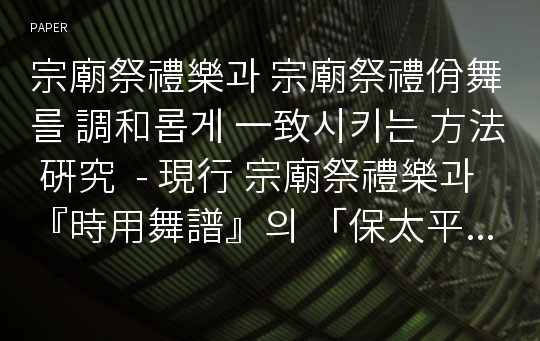