In Virginia Woolf’s texts, images abound of women seeing themselves reflected in the metaphorical mirror. While reading Between the Acts, I began to ask the meaning of this recurring motif and Woolf’s aesthetic treatment of it. The mirror reflections in Between the Acts, associated with the male gaze, often demonstrate ideas of women’s being. The female characters do so by reifying certain social patterns and positing same-laden social identities such as “a mother of two children,” the “wife of stockbroker,” or “Sir Richard’s daughter.” However, they simultaneously feel intruded on and violated by looking at their own images in the mirror, since they have to become what the male subjects want to see―objects. Moreover, they seem to desperately find the possibility that their selfhood can be interspersed not with the rule of “sameness” in the male-dominated representative system but with the rule of “difference” by imagining what the other side of the mirror might be. In this paper, I explore how Woolf demonstrates the issues of women looking at themselves in the mirror in Between the Acts and the correlation of that conception with their sense of frustration, anxiety, and fear by using various feminist theories such as Luce Irigaray, Elizabeth Grosz, Julia Kristeva and Kaja Silverman, etc. For this, I divide my discussion into three parts: the relationship between the reflection in the looking-glass and the male gaze, the issue of the deficiency of female language, and Luce Irigaray’s and other’s feminist theory and its solution for it. 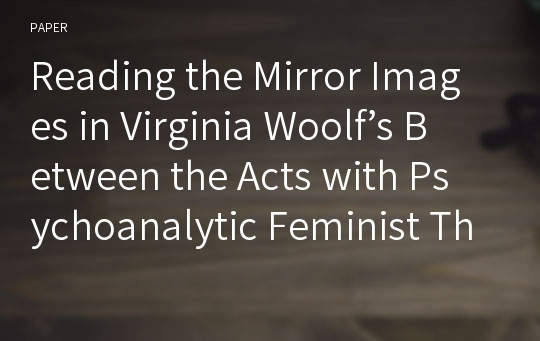