Joseph O’Connor’s Star of the Sea: The Irish Famine and Pathological Families

This article historicizes the psychopathological aspects of family process in the Irish Famine Joseph O’Connor’s Star of the Sea presents. Critics on Star of the Sea have drawn much of their attention to the novel’s revisionist complication of the traditional view of the Irish Famine as the Irish holocaust by the English government. Taking note of O’Connor’s non-racial, non-national discourse on the historical calamity, this article makes the case the social effects of the attachment problem in family process during the Famine on Irish emotional life. Drawing on Bowlby’s attachment theory, this article further illustrates the historicity of the Famine-driven emotional illness appearing in both Irish and Anglo-Irish families. The disruption of family bond especially from the loss of the mother figure ethnographically originates the Irish emotional character such as the emotionality of betrayal and the ambivalent feelings of attached-detachment towards Irishness. 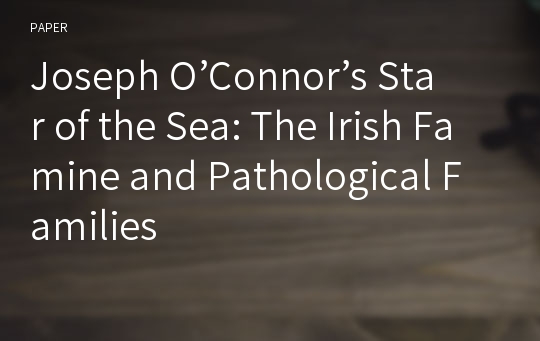