This paper examines how a system of justice can be established in the Neo-Confucian School of Cheng-Zhu 程朱學 from the perspective of social networks. The keyword is the principle of sustainability, which stems from the ecological concept of “sustainable development.” For Neo-Confucianists, the world, which is represented as myriad things under heaven and on earth, is a coherent whole with a certain origin and unitary processes. This world-view is reflected in the sustainable operations of its social structure. The process of justifying the sustainability within this worldview can be approached from three categories: tianli 天理 (Heavenly Principle), tiyong yiyuan 體用一源 (one source of substance and function), and liyi fenshu 理一分殊 (one Principle and its multiple manifestations). One source of legitimacy in this system is expressed under the concept of the “Heavenly Principle.” In Neo-Confucian thought, it provides the basis for justice in human relations. Its mode of changeability is expressed as “one source of substance and function, ” which provides an organic quality of appropriateness to the human social relationships. As a result, the structure in which relationships are sustained is sometimes expressed as “one Principle and its multiple manifestations.” It provides a holistic unity to the orientation of social networks. These three categories reciprocally support one another, but the first two are integrated into the third (liyi fenshu). In particular, the third works implicitly as the basis for positing a unified total system, in the sense that the same principle is seen as being comprehensively maintained in several complex individual relationships. Here, the ecological concept of sustainability provides several useful suggestions for explicating a logical mechanism of justification within a Neo-Confucian system. The structure of sustainability can be symbolized as a web of social networks, according to which members in a community are suited to play their roles in each field and, on this basis, bring forth their maximal productive activity. Such a model preserves an open horizon of coexistence and cooperation for newly emergent order within a series of integral relationships between person and community, knowledge and practice, ideal and reality, etc. The Neo-Confucian system, therefore, concentrates upon a principle of “reality” rather than upon one of “entity.” Neo-Confucianists, while diverse in their thought, tended to share a common way of thinking within a social network. In a reality characterized by incessantly changing processes, they constructed a sound system for a moral canon of justice oriented toward self-realization (ziwo shixian 自我實現). As a consequence, the Neo-Confucian world-view has a logical, sustainable mechanism for both moralizing justice and justicizing morality. 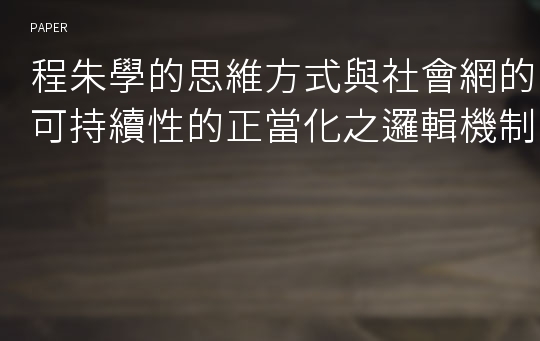