The strategic intention of China and Korea's establishment of FTA and its impact on economic cooperation in Northeast Asia Ma, Jing․Kim, Hyun-Tae  Based on an adjacent geographical position and active economic and trade cooperation, China and Korea are both involved in the economic cooperation of Northeast Asia region. Northeast Asia has always been the intersection of strategic interests of China, the United States, Japan, Russia and other great powers. The remaining Northeast Asia historic heritage and frequent security issues after the Cold War deeply influence the normal relations between countries and limit regional cooperation. For a long time, Northeast Asian countries have focused their regional policies on security issues, resulting in a lack of mutual political trust, a slow free trade agreement and a lack of relevant systems. Under the current circumstances of low regional economic cooperation in Northeast Asia, the successful negotiation process and the smooth effect of China-Korea free trade agreement are thanks to the favorable conditions for the establishment of a free trade zone between two countries. Besides, the leaders of both sides have been actively promoting the establishment of free trade agreement both in terms of economic and political considerations. So far, China-Korea free trade zone is characterized as one with China's largest trading volume and the highest level of comprehension, as well as one with the widest involvement and the most abundance. Therefore, the signing of the China-Korea FTA has attracted great attention and positive evaluation from the political, media and academic circles of China and Korea. All in all, The establishment of China-Korea FTA is of great significance to both countries, and is a landmark event, which will help alleviate the economic pressure, improve the industrial structure and competition ability, not only stimulating the economic and trade between China and Korea and achieving a new leap forward of the bilateral economic and trade relations, but also playing a certain role in promoting the ongoing trilateral FTA negotiations among China, Japan and South Korea, and having a greatly important influence in regional economic cooperation and even regional economic integration in Northeast Asia. 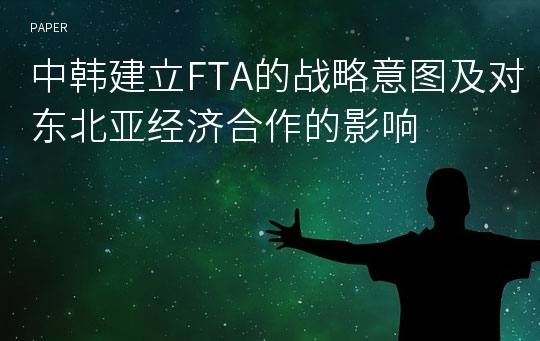