Wireless sensor networks are often organized in the form of clusters leading to the new framework of WSN called cluster or hierarchical WSN where each cluster head is responsible for its own cluster and its members. These hierarchical WSN are prone to various routing layer attacks such as Black hole, Gray hole, Sybil, Wormhole, Flooding etc. These routing layer attacks try to spoof, falsify or drop the packets during the packet routing process. They may even flood the network with unwanted data packets. If one cluster head is captured and made malicious, the entire cluster member nodes beneath the cluster get affected. On the other hand if the cluster member nodes are malicious, due to the broadcast wireless communication between all the source nodes it can disrupt the entire cluster functions. Thereby a scheme which can detect both the malicious cluster member and cluster head is the current need. Abnormal energy consumption of nodes is used to identify the malicious activity. To serve this purpose a learning based energy prediction algorithm is proposed. Thus a two level energy prediction based intrusion detection scheme to detect the malicious cluster head and cluster member is proposed and simulations were carried out using NS2-Mannasim framework. Simulation results achieved good detection ratio and less false positive. 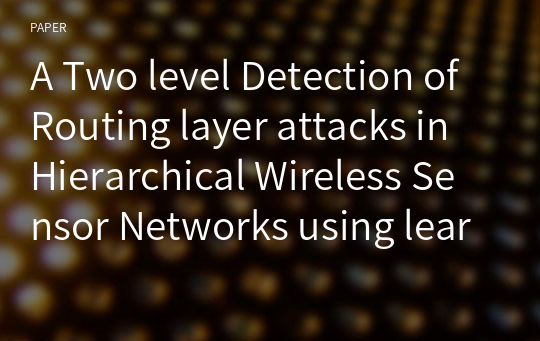