Skin barrier impairment plays an important role in many skin diseases across species. In terms of inflammatory skin diseases, atopic dermatitis (AD) is the classic example of the role of skin barrier impairment and its role on allergen sensitization and severity of clinical signs. Skin barrier dysfunction may be primary or secondary to inflammation and in many clinical cases both mechanisms play a role. The negative effect of T helper 2 cytokines on skin barrier integrity is well known<sup>1</sup>. Cutaneous inflammation predisposes to sensitization, even to weak allergens<sup>2</sup> thus it becomes a clear risk factor to aggravate dermatitis and in humans, to lead to the progression of the atopic march. Skin barrier dysfunction is crucial in AD in animals too. Evidence exists in dogs with AD that skin barrier dysfunction exists although it is not known whether it is primary or secondary<sup>3</sup>. In dogs this has been demonstrated with measurements of function such as increased Transepidermal Water Loss<sup>4</sup>, decreased ceramide contents<sup>5</sup>, and ultrastructurally<sup>6,7</sup>. Atopic dogs show alteration of lipid lamellae and retained lamellar bodies in corneocytes, possibly due to a defect of extrusion that may be responsible, at least in part, for the decreased ceramides. In dogs too it is known that skin barrier damage facilitates allergen sensitization in experimental models<sup>8</sup> and may play a role in naturally occurring disease as well. One pilot study showed that similar ultrastructural abnormalities are also present in atopic horses<sup>9</sup> highlighting the concept that skin barrier defects in AD occur across species. Thus skin barrier repair is considered a main strategy for the management of AD across species<sup>10,11</sup>. Emollients and moisturizers have been used for decades in atopic patients. Ingredients used in skin repair include combinations of petrolatum, vegetable oils, glycerin, and urea. Large differences exist between products and efficacy depends on the type of product and frequency of application. Several clinical trials have shown the benefit of ceramide based topical therapy, in both humans and dogs<sup>12,13,14</sup>. Several ceramide based formulations have shown positive effect both on skin barrier and severity of clinical signs in dogs, Lipid alterations may be restored with topical application of sphingolipids leading to correction of some of the ultrastructural abnormalities seen in atopic dogs. Preliminary studies have shown that topical application and systemic administration of fatty acids also improve lipid deficiencies in the skin of atopic dogs<sup>15,16</sup>. Great interest exists in the development and testing of synthetic pseudoceramides as moisturizers rather using natural ceramides to avoid potential unwanted effects and to decrease cost. It is proposed that the main effect of these compounds is restoration of skin barrier and replenishment of lipids although there is preliminary evidence that it may also have anti-inflammatory effects. Disease remission in humans is paralleled with improved skin barrier both with calcineurin inhibitors and glucocorticoids. In veterinary medicine, a preliminary study on cyclosporine and prednisone failed to detect significant improvement of water loss while successful immunotherapy correlated with improved skin barrier. Controlled, large studies are needed to address the question of which skin repair approach is clinically most effective and whether this can be used as a preventative strategy. 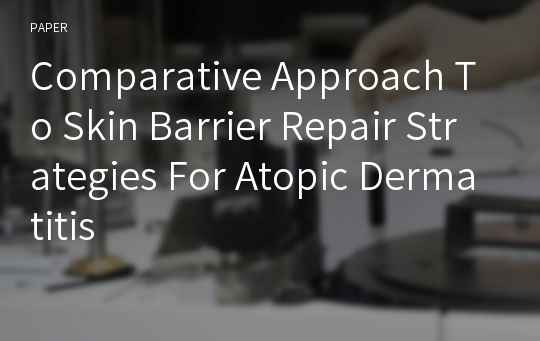