Examined in this article, is how a `Politics of Translation` was triggered in Korea, over George Orwell`s 『Animal Farm』 and its Korean translation. It seems that, in the process of translation into the Korean language, the original meaning of the story used to be replaced by something different, and a certain modification of the original meaning was made, in each of the individual translation efforts. And in all those times, the range of reality dealt with or insinuated by the novel became an issue of discussion, between people who argued that the book was a well-designed satire, and people who interpreted it as a mere fable. A Korean translation of (Animal Farm( was announced for the first time in 1948, by Kim Gil-jun. This Korean translation seems to have distanced itself from the original intention of the author, which was to make a satirical statement regarding the `Betrayal of the Russian Revolution.` By Kim Gil-jin, it was rather read as a fable, with a theme containing a social comment, made upon the issue of Communist dictatorship(instead of the original object, which was Capitalism). In Korea,which was serving as a test bed for the ongoing Cold War at the time,the image of Communists was juxtaposed with the image of Pigs(in the book) and also of the Exploiters, which constituted the image of the `Enemy.` A satire which was originally meant to criticize Capitalism that has been forcing humans to become lowly animals, was transformed into a fable that criticized the Communist dictatorship in general, in a Korean translation. After the war, the Korean-translated 『Animal Farm』 still did not show any traces of the original nuances concerning criticism against Capitalism. Yet the politics of translation fired up once again, over determining the reality that was being criticized by 『Animal Farm』. In 1954, Yi Gyu-hwan presented a new translation of 『Animal Farm』, as a fable that criticized not only Communist dictatorships but also all the “politicians who exhibited dictatorial traits in both West and East.” It was an extension of the existing criticism against anti-Communist dictatorships being committed in the Third World states, based upon the theory of `the Victimized Public.` More than a decade later, another translation of 『Animal Farm』 surfaced in 1969, and while the original material was translated as a `satire upon the Russian revolution,` a return to its original nuances, it was only interpreted so out of an attempt to `exempt` South Korea from the criticism raised by the material`s narration. Then, a few years later, this trend was radically reversed in 1972. Kim Byeong-ik`s argument that said “even with slight differences in terms of ideology or exterior, we can find the horrific and abominable image of `Napoleon,`from the hollow appearances of a retroactive betrayal that was called a revolution, and also the appearances of dogmatic despots,” actually managed to connect the fable-ness of 『Animal Farm』, together with the people`s general criticism against the “Yushin system,” and the revision of the Constitution, which enabled the President to have a third term. In short, 『Animal Farm』 was stripped of its anti-Capitalist nature when it was initially translated in Korean as an anti-Communist novel, yet in the following periods, sometimes it was also translated as a story full of criticism against anti-Communist dictatorship. 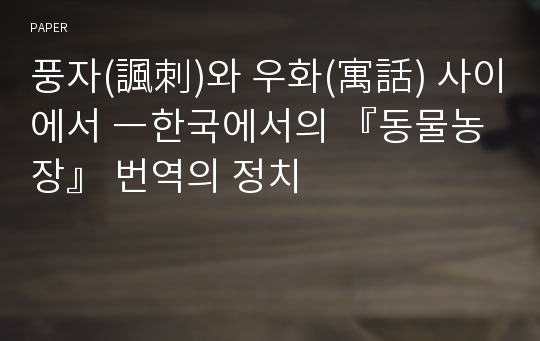