The North American Free Trade Agreement (NAFTA) is an historical free trade agreement between the United States, Canada, and Mexico, that came into force on January 1, 1994. NAFTA dramatically reduced some tariffs immediately while other tariffs will fall to zero over a 5 to 15 year period. The purpose of this study is to illuminate the characteristics of NAFTA and the U. S. -Mexico trade. The impact of NAFTA on regional economy and environment is still controversial. According to the statistics since 1993, the U.S. export to Mexico has increased except the export decrease in 1995 due to the peso devaluation, while the Mexico`s export to the U.S. has rapidly increased because of not only NAFTA but the peso devaluation. Considering this trade increase, NAFTA seems to move forward in the right track. NAFTA made the spatial division of labor between the U.S. and Mexico more visible. The impact of NAFTA on employment has been expected to be negative to the U.S. and positive to Mexico. However, the U.S. employment has increased because of the boom condition of the national economy, and the Mexico`s employment has decreased for a period of time because of the foreign exchange crisis and the subsequent economic restructuring. Mexican economy is oriented toward the United States since the U.S. is its most important trading partner, absorbing 78 percent of Mexico`s exports and providing 65 percent of its imports. The economic restructuring of Mexico resulted that the top export item of Mexico to the U.S. has shifted recently from crude oil to automobile. More than 40 percent of export-oriented industries in Mexico are maquiladoras, which are foreign-invested factories in Mexico importing raw materials and components duty free and exporting the finished products to the U.S. Some Korean-invested maquiladoras are located in the Mexican border area in order to utilize the cheap Mexican labor and the better accessibility to the U.S. Still they need to find firm resolutions to meet the rules of origin regulated by NAFTA. 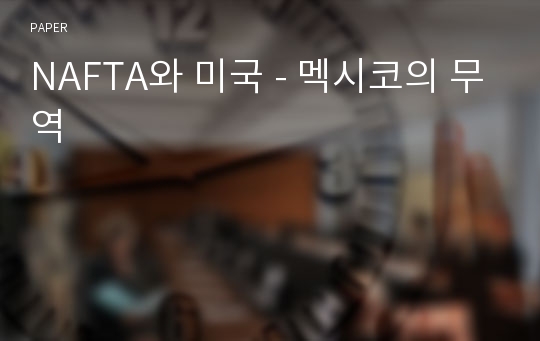