We do not read Paradise Lost as an existential poem which is supposed to help us to engage in our pressing life problems. With the fall of Christianity and the rise of Modernist poetics, this biblical narrative in epic form degraded to one of texts in a classroom reading list or fragmented memes for pop culture. Most of Milton students approach this classic from scholarly interest without committing their life to the text. It is in the history of Milton criticism that C. S. Lewis occupies a unique position in that he not only wrote a criticism of Paradise Lost from historical approach (A Preface to Paradise Lost), but also remythified its criticism with his fictional creation of an SF novel (Perelandra). He, moreover, enacted the criticism in his life as his change of misogynist attitude exemplifies it. Lewis did not just historicize the target text, but walked into the time in which the text had been born and became an indigenous citizen of the age, while abolishing the modern myth of objective distance between a critic and his or her text. The last dinosaur or the last medieval man, as Lewis called himself, did not study Milton, but he met him and talked to him “in person.” And he returned to us with the story of his over-identification with the past, which in turn questions the validity of (new) historicism. 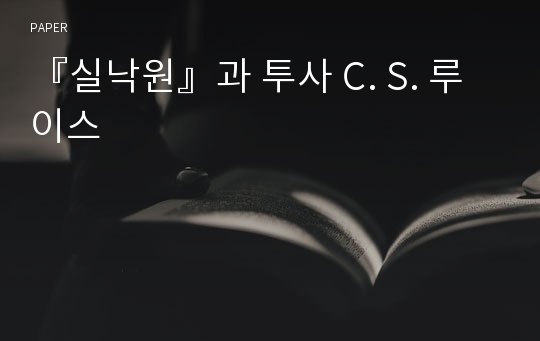