In the late Joseon Dynasty, the famous scholar Song Siyoel (宋時烈1607-1689) advocated for the principle of “Respect the Zhou”尊周論, which maintained that Koreans should honour Confucian orthodoxy and actively fight against the newly established Qing Dynasty in China. However, in the late nineteenth century, Li Hanglo (李恒老 1792-1868) embraced Song`s principle in his establishment of the Hwaseo School 華西學派, calling for the people to respect China and repulse the barbarians as he led the battles against Westerners arriving by boat. He asserted that all religions and ideas other than Neo-Confucianism were dangerous and heterodox. As Qing China was collapsing, Li asserted that the Joseon Dynasty had a responsibility to re-establish the civilization in Korea. This line of thought was known as Joseon-Junghwaism 朝鮮中華主義. Li went on to compile the Compendium on the History of China and Korea in the Song and Yuan Dynasties 宋元華東史合編綱目, which discussed the Sino-barbarian dichotomy as seen in this 408 years of history. You Yinseok (柳麟錫 1842-1915), Li`s successor in the Hwaseo School, continued the tradition of respecting China and raised an anti-Japanese army to fight for justice after the assassination of Queen Min in 1895. The particular Sinocentrism of Joseon-Junghwaism as practiced by the Hwaso School aimed to correct Chinese civilization with neo-Confucianism, at the same time it was a principle that offered national self-respect and a method of survival in the modernizing world. 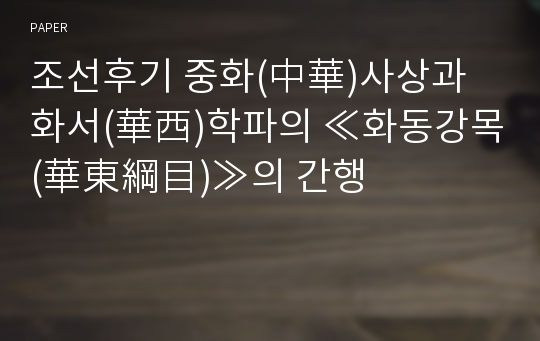