The main idea of PEuthyphrod talks about what the piety is. It mainly concentrates on the definition of piety. Generally, to define the piety is the process of clarifying the essential meaning of it. Euthyphro represents the educated adults in Athene. Socrates tried strenuously to make them realize the true knowledge by awaking their ignorance through the dialogue. He tries to get the true definition of piety. In order to define(bpt~$tv) the piety, Socrates first should free Euthyphro` mind from the ordinary and conventional ideas which everyone in the Atticage believes normally, and then he makes Euthyphro find the universal meaning of piety which can endure the keen critic of opponent. In this dialogue, Socrates states another side of views from the Athene`s ordinary views about the piety. Therefore his argument reveals the significance for the another purpose beside the logical criticism. In order to find out the deep intention of Socrates, I investigated this dialogue by the analyzing it. In Socratic age, the piety is related to the public mind and the gods of Athene. In that sense, the meaning of piety in this dialogue implies the scheme or the ideology which effects the public policy in the times of Attic age. At that times many citizen of Athene ~tbJ~ts, specially young people, were distorted by the individualistic and selfish education for which sophist makes to promote. By the effect of sophist, they place individualistic interest at the head of public affaires. And so Socrates really does care about the future of his fatherland and youngman very deeply. And he tries to clear the misunderstanding of Athene citizen by his famous argument. By that significance, we can infer that Socrates` attempt for finding new meaning of the piety, as it were, is the effort for moralistic and religious reformation in Athene. If we see this dialogue scrutinizingly, we know that there are not only the logical side of views but also the intentions of Socrates in this critical argument. The main plot of this dialogue talks about the critical analysis . toward the definition of piety which Euthyphro suggest, but the significance of socrates` argument has the power of clearing his opponent`s wrong ideas(x(i&~tS). And thus Socratic ~J~?xoS can to cause to find the Idea( ls~a, et&os, nap~BEt~a) which is the measure of correctional judgement on moral words. This dialogue definitely shows the method and main ideas of Socratic EaEVxoS. This paper is the summary of the dialogue which shows the effects of Socratic E~Yxos and his philosophical theory of it. 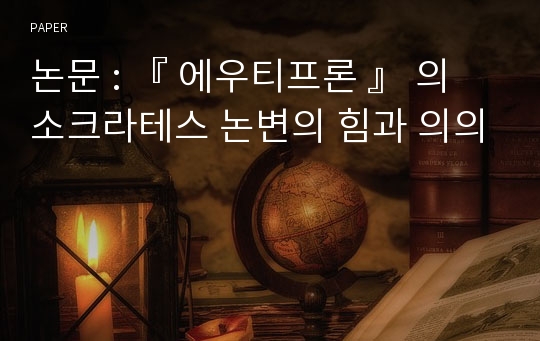