Some Educational Problems in the Late Victorian Age: the Discourses on Examination A liberal journal, the Nineteenth Century published several essays protesting `over-examination` in November 1888. These essays were filled with condemnation on the educational evils originated from `over-examination`. After that, with the special supplement which aimed at the critique of the protests, it published another protesting essays against examination separately. Until the early nineteenth century, the English people was not accustomed to the competitive examination. Most public official positions were generally appointed by the recommendations of notable men. This patronage relation is usually called `Old Corruption`. But as English society had experienced gradual industrialization, the mechanism of Old Corruption could not become compatible with new industrial order. As a result, the competitive examination and the appointment by it began to be introduced to the English society. What caused the debates on `over-examination` in 1880s? Perhaps the debates were related with the report of the Royal Commission on the elementary education published in 1888, which especially criticized `the payment by the results of examination` in the elementary education. Though the essays in Nineteenth Century also pointed out some problems brought out by over-examination, they focused on the degrees of problems which were derived from the competitive appointment of public offices and the graduation examination of Oxbridge. The critiques of the protests also admitted that examination raised some evils and problems. But they criticized the protestor had fictitious knowledge of the educational situation. They request the alternative of the competitive appointment of public offices, which should not be any disquieting and pernicious novelty. The critiques explained that but for competition, the English society would have been again confronted with partisan appointment and patronage, the tradition of `old corruption` in the earlier century. Though we could regard the competitive examination system of the late Victorian age as new industrial order, it does not mean the rapid transition from patronage to true competition. These changers were no more than the result of compromise which could be likened to the wrapping of an outer garment of competition around a body of patronage. Because public office examinations consisted of the subjects such as Greek, Latin, mathematics, they were more favourable to examinees from public school or Oxbridge. The standards of the elites were the cultural marks of the schools which English ruling class had attended for a long time. and it was this cultural style that played the most important role in the appointment of public office. 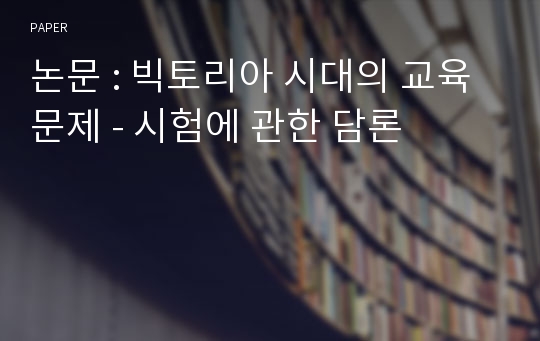