Ethnic, historical, cultural and many other factors in the African-American experience contribute to their latent tragedy as seen in Pecola`s story. But the most decisive seems to be their ethnic feature of skin color. Their tragedy begins when African-American children internalize an ideal self-image inspired by the white values of the dominant culture before they grow old enough to incorporate their own skin color into an inevitable part of their consciousness of the self. The ideal self-image is more encouraged by the culturally colonized black community itself than by the white society. The Dick and Jane primer designed according to the white standard is also used for African-American children, and this is the first of those things which colonize innocent children`s minds and inspire their ideal self-image. For Pecola, eating blue-eyed "Mary Jane candy" is itself a ritual act to be Mary Jane. But perhaps the first and most important factor in Pecola`s tragedy lies in the difference in skin color, which can never be overcome by any ritual or anything else. On the other hand, we can see Claudia`s protest against the white values and her acceptance of the black in destroying her Christmas gift, a blue-eyed doll. The difference in these African-American children`s attitudes toward white idols, and in their ultimate fate, comes from the different atmosphere of their homes, mainly from the different attitudes of their mothers. Claudia`s mother has her own world equipped with "tar quality", which she and her family can turn to for comfort when hurt or rejected by the others, black or white, while Pecola`s mother lives for a white family and rejects her own child. Hence, Pecola escapes into a mad world of fantasy where she believes she has `the bluest eye.` In reality, Pecola is completely devoid of the ground to provide an alternative to her ideal self-image when it Ms her. This novel dramatizes tragic aspects latent in innocent African-American children`s establishment of their consciousness of the self in the dominant cultural values. 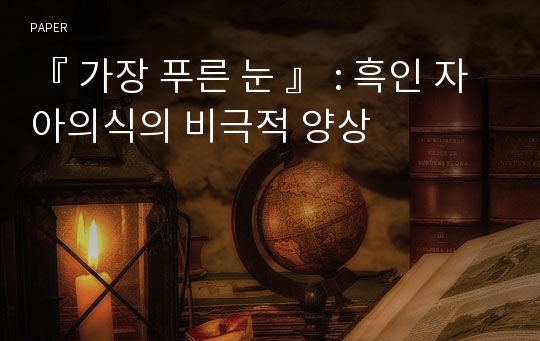