The aim of this paper is to read Thomas Hardy`s Jude the Obscure(l895) in terms of the characteristics of modernist literature and to identify a peculiar kind of modernity in Jude the Obscure. The claim I make here is that in Jude the Obscure, apart from the ways in which Hardy rendered his characters` sexuality, it is possible to identify three techniques remarkably similar to those beginning to be adopted by other modernist artists in different countries and in different media at almost exactly the same time, and that, in this respect, Jude the Obscure was at the forefront of three important developments in the history of Western art and modern in that way. Three techniques are as follows: First of all, Hardy employed techniques for denying readers a sense of final resolution and closure. In the second place, we can find the expressionist elements in Jude the Obscure, and finally the beginnings of a practice of mixing sharply conflicting artistic modes in a single art work. My point in this paper is that, in his mixing of expressionistic and realistic modes in Jude the Obscure in 1895, he was again at the forefront of a development which cut across artistic forms and national boundaries and led to major formal innovations characteristic of some of the touchstone of later twentieth-century art. The above-mentioned devices used by Hardy in Jude the Obscure are striking instances of his early use of distinctive formal strategies which show up with growing frequency in modem literature and other artistic mediums. In this respect, I can conclude that Hardy was working at the leading edge of some of the major artistic movements of his day, and by identifying these particular features it is possible to specify in relatively precise way just how Hardy`s Jude the Obscure may be said to have been a modem novel. 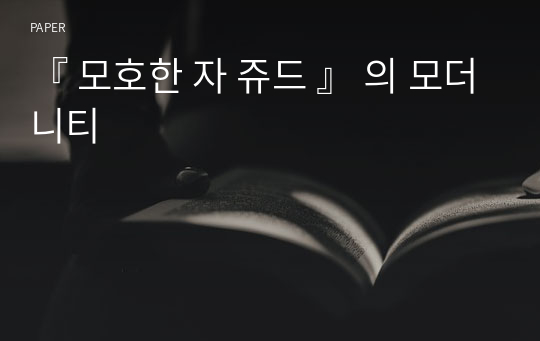