In Ceremony, Leslie Marmon Silko delivers a message that the responsibility that goes with being human in the era of ecological disaster is to be aware of the fact that "the earth is fragile," as Ku`oosh says in the novel, and to speak that awareness. She blames the leading Western capitalist ideologies based on the concept of perpetual progress for the ecological crisis of the contemporary world. She warns the contemporary world that if humans are determined to remain as the rulers of nature, not living within the cycles of nature but being continuously obsessed with "the exploitive, linear mentality of forward progress" (Merchant 1983 xxi), we will never be able to escape the total destruction of the ecosystem upon which our own existence depends. Silko demands a shift away from anthropocentric humanism toward an ecocentrism guided by the principle of self-realization for all members of the ecosystem. Ontological equality and interdependence among the members of the ecosystem are at the core of Silko`s ecovision, and it reflects the ancient Laguna Pueblo`s inclusive vision of the world. For her, all beings, including humans, animals, plants, minerals, wind, and water, are equal members of one family sharing in the spirit of the Creator. In the web of life, humans are neither the center of value and meaning nor self-sufficient beings. To understand "self/other as interpenetrating part/part and part/whole relationships rather than dichotomy" (Murphy 9) is fundamental for understanding Silko`s ecocommunity. In Ceremony, the human and nonhuman nature relationship is based on love and respect and is treated as a moral issue conditioned and restricted by ethics. Silko also insists that the domination of nonhuman nature by man stems from the domination of human by human, and, therefore, in order to realize an ecological justice, we also need to bring about social justice. As most ecologist writings do, Ceremony encourages us to accept eco-consciousness in order to realize ecologically just societies, that is, "nonauthoritarian, nonoppressive, nonhierarchical, `postmodern` societies in which free, playful, decentered, heterogeneous people live in bioregionally oriented,… democratic, ecologically sound communities" (Zimmerman 6). In Ceremony, Silko questions and destroys the authority of the shallow capitalism mainly focusing on material wealth and progress, and logics of domination which have been used as means of exploitation and oppression of people and nature. Silko once stated that "the most effective political statement I could make is in my art work [and] I believe in subversion rather than straight-out confrontation" (1990 147). Ceremony is a text of resistance aiming at a gradual subversion of the corrupt white capitalist culture. What is important for her is to build dehomocentric and nondualistic cultures capable of generating "multicultural social interactions that recognize the inevitability of difference and conflict without domination or forced assimilation" (Murphy 57). 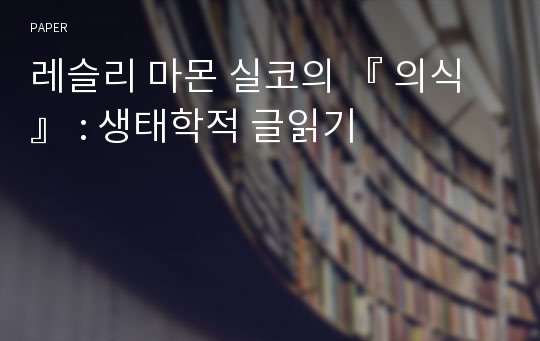