In The Bluest Eye, Toni Morrison explores the pain of growth, and the lives of poor black girls and women in the white dominated society of the 1930s and 40s. The novel reveals that, despite the rhetoric of multi-racial and multi-cultural vision, American society has been controlled by the mono-vision of white values, regardless of gender and color. Here, even though they are totally different and are segregated from whites, black women, like Geraldine, Pauline, and Pecola, struggle to live up to, and finally internalize, white standards. They dream, in vain, that if they can resemble whites they will also be able to enjoy the perfect, rich, and happy family life pictured in Hollywood romantic movies, and in other media images. Geraldine, Pauline, and Pecola try to mimic whites in every possible way in order to enrich their lives. Pecola even wishes to discard her black body and obtain a new white body, and she prays for blue eyes. When they realize the illusionary quality of their dream after being denied access to the white world through their mimicry, these black women blame themselves instead of rejecting the white standard. They ultimately become convinced of their black body as being ugly and contemptible, and they face an identity crisis. Morrison does not overlook the fact that black women themselves are responsible for their own frustration, in that they couldn`t form an "oppositional gaze" under the white cultural gaze. However, Morrison places a far greater responsibility on the toxic influences of white monopolistic culture, which presupposes whiteness as a standard and blackness an atrophy. 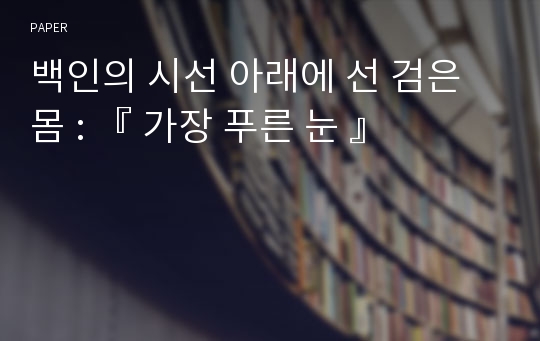