In The House of Mirth Edith Wharton criticizes the way how the socio-economic system of capitalism causes her characters, particularly Lily Bart, to be dehumanized and to suffer. Connecting Lily`s plights with her gender, Wharton`s critique of the system is seriously concerned with the way how the system works against woman. Being raised to be an ornament which a man can possess and boast of, Lily doesn`t have any independent way for a living in spite of her intelligence and gift; the only business of a lady like her is to be married. Her dilemma, however, lies in the fact that marriage is nothing more than selling herself in "the house of mirth," where everything is viewed from a material standpoint. Therefore, she resists marriage while she tries all her talents and energies to capture a rich husband. Her ambivalence to marriage comes from her conflicts between two identities: her own identity autonomous and of self-respect and the identity given to her by patriarchal money-centered society. For her integration she must overcome the disparity between these two selves, or the alienation within herself. Her tragedy, however, is that the more her autonomous and moral self increases, the more her social status falls. An irony in her tragedy is that she is ruined by being branded as a whore in the frivolous society not in spite of but because of her refusal to "prostitute" herself by giving beauty, sex, intelligence, and morality in exchange for wealth. In The House of Mirth Wharton delves into what it is to be a woman in a sexist capitalist society: how Lily Bart tries to be her own self in the society with the double standard, and how vulnerable she is in it. 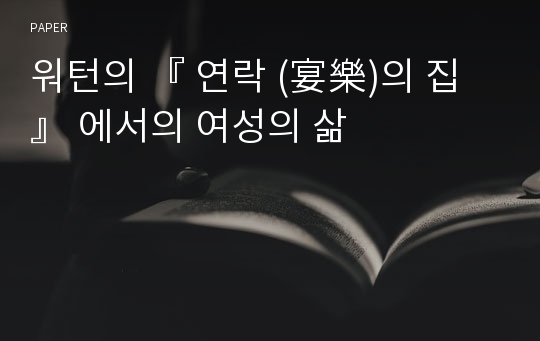