The Tale of Chunagon Tsutsumi is the only extant collection of short stories with complicated forms and contents written in, the late Heian period (the eleventh century) or in the early Kamakura period (the twelfth century), while there are a number of extant long stories written in the corresponding periods. It is like contemporary collections of short stories in that it has a keen literary sense and a fresh literary flavor, and may be regarded as the first short stories in Japanese literature. Although it is affected by The Tale of Genji, one of the most salient masterpieces in Japanese literature, it pursues literary independence and possesses some literary elements not to be found in other Heian "tale" works, thus enjoying a high reputation as one of the peculiar literary works in Japanese literature. It contains ten stories and one titleless piece. Although we do not have any other Heian short stories, the existence of the Tale shows us that there might have been many other short stories in the Heian period. And the Tale provides us with many valuable clues for understanding the foundation on which Heian literature is built up and for studying the relationships between long stories and short stories in the Heian period. This article deals with the foundation on which The Tale of Chunagon Tsutsumi is built up, the process of its construction, its date of appearance, the order of stories, and the quality of "tale" stories. The date of appearance of stories in The Tale of Chunagon Tsutsumi is unknown, the only exception being Ausaka Koenu Gon Chunagon (Chunagon Gon`s love). The author or compiler of the Tale and its date of compilation are unknown either. These uncertainties about authors or dates of Heian "tale" stories, however, may be regarded as understandable, considering that Heian "tale" stories began to be written to give comfort to others, and that they were regarded as jointly owned as necessary media for cooperation and peace between court ladies under late-Heian regency. The year 1055, the date of writing Ausaka Koenu Gon Chunagon, sheds, to some extent, light on the background of The Tale of Chunagon Tsutsumi. The year belongs to the golden age when Michiyori Fujihara, the Regent, exerted a powerful influence on almost all the aspects of Heian culture. The Fujiharas` power, however, began to decline owing to defects in the Manor system, the most fundamental financial resources for regency, and to failures in birth of princes by empresses from the Fujiharas. And yet the relationships between empresses and between court ladies were more peaceful than those in any other period of the Heian era, and, together with Emperor Goreisen`s enthusiasm for literature and Yorimichi Fujihara`s financial influences and human character, helped to build up and develop court literature of the late Heian period. The date of writing The Tale of Chunagon Tsutsumi seems to belong to the period between the late Heian period and the early Kamakura period in terms of the two points below. First, the Tale reflects emerging decadence and enjoyment resulting from the literary and political background, mentioned above. Secondly, it also reflects anti-monarchy and anti-aristocracy, the atmosphere at court at the end of the Heian period. The order of the contents of ten stories in the Tale is four seasons in their natural order, then an alternation of humor and sentiment, and finally aristocratic and anti-aristocratic. Each of the ten stories of the Tale was originally written as a separate book and later were combined in one book, the Tale. There are four extant texts of the Tale, each of which has different order of the ten stories contained in it. The order above is that of the popular text. Each of the stories makes a keen analysis of some phases of life, and has structure connected closely with other stories, and a simple style. The development of each story is of two kinds : one is a traditional kind of development in court literat 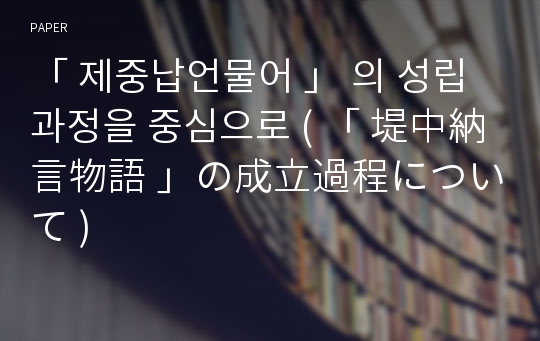