William Blake has been called the prophet. of the New Age, but many of us have been somewhat bewildered by the complexity of his mythic system. It contains serious inconsistencies and owes its line of development to Blake`s unceasing effort to reconcile them. Blake`s system is impossible to pin down. Blake is constructing systems most coherently when he is smashing systems, and he is smashing systems most vigorously when he is constructing systems. The potent contradiction lies at the heart of Blake`s system, and never-ending struggle to reconcile them gives his work its peculiar energy and value. And the main character who symbolizes the paradoxical task of artist is a "prophet of Eternity," Los. To find an answer to the question of whether Los does or does not construct a system is not possible. Los`s art city, Golnonooza, is not identified with a city of Utopia and Truth, Jerusalem, but the means toward it. The poem Jerusalem is itself a system in part. There is an absolute end at the conclusion of it. But at the same time, it seems apparently to present a never-ending process. An artistic creation is the house window open out to the world of Eternity and Truth. In Blake, the goal of art is the moment at which it becomes unnecessary, because the whole of life has taken on the character of art. It is the job of the fallen artist to reorganize the natural body, to awaken it to its self-induced limitation and its real potentialities, until it regains the capacity to arise and enter Eden by itself. In this transformation, what we now recognize is the fact that art disappears. What Eden is like can be inferred from the experience of artistic work, especially from those moments in which the images are entered in imagination. 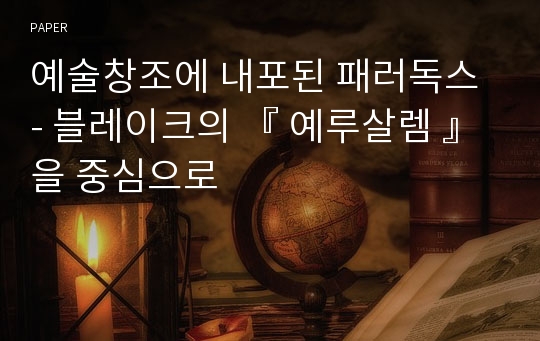