This paper is an inquiry of the book named for <Baekryunchohae> among the old-time educational textbooks for children. <Baekryunchohae> is a textbook for learning to write a chinese poem, consisting of parallelism made with five letters, or seven letters. the content of this textbook is primarily describing one about Nature`s landscape and ordinary life`s scenes. so this book is relatively so easy, is useful to teaching the childrens. For example, <chonjamun>, <myungshimbogam>, <sohak>, such like these books are used to teaching the children for a textbook in school, <Baekryunchohae> also bas been used to as a textbook for long time. especially, <Baekryunchohae> has many editional version through the longtime, in this view, it is a very proof of <Baekryunchohae> is an important book. A many preceding studies of <Baekryunchohae> in Korea were done in the era of 1960-70, almost concentrated on the matters about an editional version, editor`s view, a translation of eunhae version`s letter or haejae. This study is focused on the type of parallelism and phrase form in this book. The analytic method of contents is based on SamBun law(gongdae, indae, kwandae) in 『hanshishiyeulhak』 written by a notorious chinese linguist Wang- Ryuk. There has been many types of analytic methods in parallelism, but Wang Ryuk`s one is more available to the case of study in <Baekryunchohae>. An expecting result of this study is to drawing from more profound understanding with diverse currents of chinese poems. And this is useful to support an interesting in write a chinese poem I think, this study is helpful for the education of personality, development of sentiment. 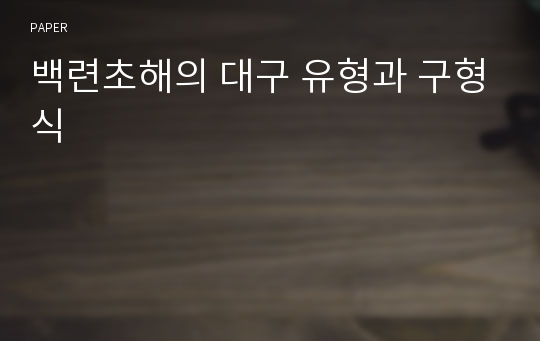