In this paper, Lim, Young and Lee, Manbu analyze the unorthodox view of Daehak by comparing it with the Zhu, Xi school of Neo-Confucianism in the earlier Lee dynasty. Through this comparison, I examine an aspect of the change in the study of Neo-Confucian classics in the later Lee dynasty. First, I examine some distinctions in the study of Neo-Confucian classics in the light of a few scholars` interpretation about Daehak in the earlier Lee dynasty. These scholars include Park, Young, Lee, Hwang and Jo, Ik. The principal distinction is the emphasis on abstractive mentality and inner practice. The scholars of Zhu, Xi attempted to get rid of the inclination for focusing solely on abstractive mentality and inner practice. Their belief was expressed by emphasizing the practical benefits of Daehak`s theories through the analysis of the annotated scriptures by scholars of orthodox Neo-Confucianism in the later Lee dynasty. In the case of Lee, Manbu, he discovers the practical benefits by looking outward and recommends that approach for others. And also Lim, Young put more emphasis on concrete objects rather than abstract ideas. Second, the viewpoint of the school of orthodox Neo-Confucianism was very critical and stern about the unorthodox. Lee, Hwang popularized the use of Yukwanghak`s critical analysis in academics. This analytical style is similar to that used by Zen Buddhists. Song, Siyeol, Park, Saeche and Han, WonJin developed Lee, Hwang`s critical analysis in academics. Later in the Lee dynasty, scholars in the school of orthodox Neo-Confucianism interpreted the unorthodox differently. Lee, Manbu studied and emphasized the individual interpretations of Daehak. Lim, Young was the strongest supporter of unorthodox. He supported the values of a Buddhist`s invocation and the doctrines of Wang, Yangming and had a impartial attitude towards the philosophy of Ki and Taoism. In this transformation of the study of Neo-Confucian classics, to some extent there was an academic attitude to response under the historical change as the foundation And it was revealed that the distinctions of the study of Neo-Confucian classics in the later Lee dynasty were not so different from the ones of a realistic study of Confucian classics. 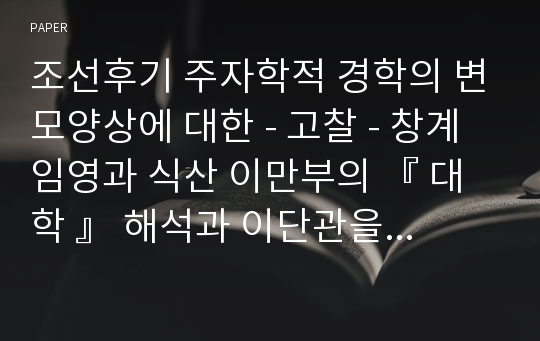