Lim sang won(林相元) was pointed out a member of eight great master of literary style in the early 18th century. He presented the three requisitions(知·爲·至) for literary composition. Among them, he laid stress on `Ji(知)`, especially `Jinji(眞知)`. So to speak, `Ji(知)` is not epistemological conception but an element of creative process. In other words, an object of sincerity which he told is a composition method. But the study of composition method can cause a writer`s individuality and contradiction. About this problem, he insisted that a literary sincerity which we should know is not limited to an simple composition method and it is a broad sense which included creative principle which had resulted from writer`s character. He became aware that sentence had a protean character. In the 「Mun-soel(文說)」, he regarded an artistic vitality as a protean character. The substance in a Lim sang won(林相元)`s poetics is an effective value of poetry. Because he is a literature and bureaucrat, he seriously think over poetry`s social, political usefulness. He urged the necessity of poetry for carrying out Yee(禮) which had a compulsory, vertical and formal peculiarity. The realistic meaning of his poetics is that it developed the poetical evolution theory and effective value theory in an human relations within a social organization. But he laid stress on having all the aesthetics factor for poetic value. It is worth of giving attention to his logical reasoning about the response among three factors(the creative-subject, the creative-object, reader). In a word, Lim sang won(林相元)`s literary theory is a mixed fruits of realistic sense and aesthetics request. In a creative theory, he tried to show a method of an actualization`s of creative work`s. And in a poetics, he emphasize the sufficiency of aesthetic condition for an social effective value of poetry. 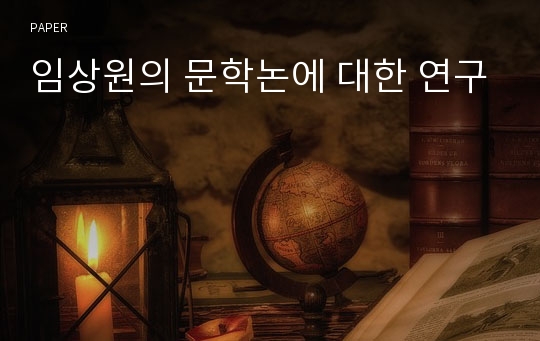